India’s game studio opportunity has been dormant for a long time, even as the country thrives with tech startups growing into big companies with billion-dollar exits. But Lumikai announced its first gaming fund for India in August, and now it is making its first investment into Bombay Play. Lumikai led the round, joining existing investors Playco and Leo Capital.

Ten years ago, India had only about 25 game companies, market researcher Newzoo said. Now the country has over 300. But those studios have been starved for money. Perhaps $300 million to $400 million has been invested in Indian game companies in the last few years, and most of that came in the last 24 months, according to Lumikai.

“We have something to prove here, that world-class games can be made in India,” said Jones in an interview with GamesBeat. “That’s why we decided to include the name Bombay for a popular place that everyone knows about India.”

Oliver Jones and Abhas Saroha founded the company. Jones previously led game design at Glu Mobile and Zynga before cofounding Moonfrog Games, where he helped create one of India’s most successful card games, Teen Patti Gold. Saroha previously led engineering at Zynga, Moonfrog, and Makemytrip.com. The cofounders have worked together for nearly a decade. Moonfrog, which included the famous American game developer Mark Skaggs (behind the Command & Conquer and FarmVille games).

“Moonfrog was about building for India and for the Indian consumer. So the most popular games were like Teen Patti Gold,” Jones said. “These games were culturally relevant in India, and it was a blind spot for most international game developers. With Bombay Play, were are not just looking at the Indian consumer. We’re actually looking global and exploring a lot of ideas right now.”

The good thing about making games that appeal to both the Indian and global markets is that both are demanding top-flight multiplayer features, he said. 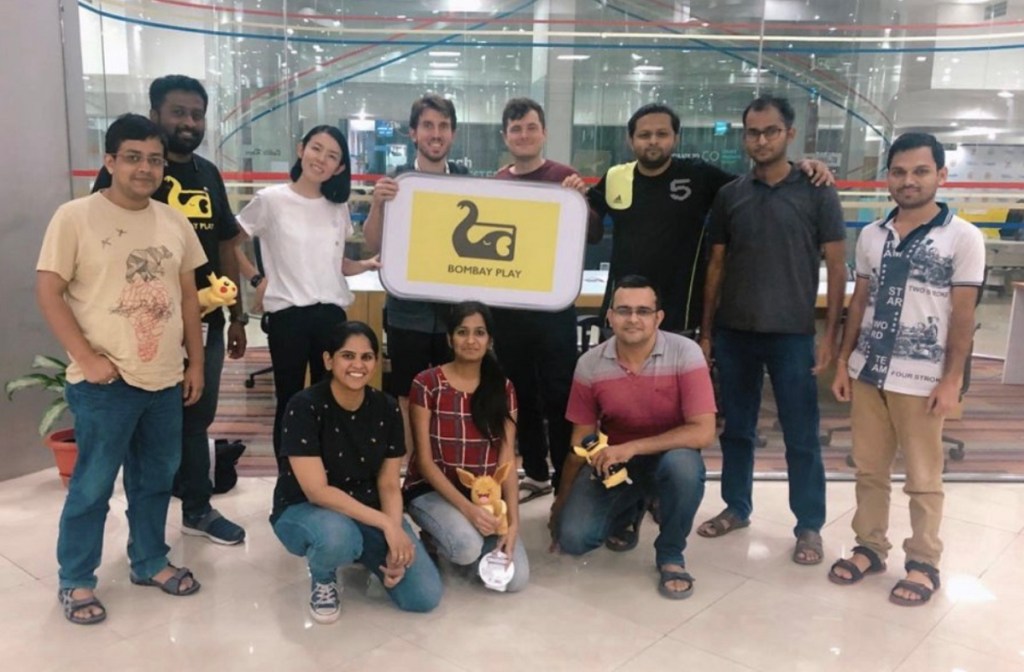 Above: The Bombay Play team in Bangalore, India.

Bombay Play has found inspiration from other countries. India’s challenge isn’t so different from China’s own efforts in the past decade. It’s worth noting that 20 of the top 100 games are now made by Chinese developers, according to market analyst firm Niko Partners.

“We have been some bias, especially in the game industry, like there was toward China,” Jones said. “There were commentators saying Chinese games could get metagames and complex systems right, but they couldn’t get the gameplay right. Similarly, India is viewed as the back office of the world, with a lot of software service companies and that they just handle the back office for the game companies.”

Another inspiration is the success of the Turkish mobile game developers — Zynga has acquired multiple Turkish studios for billions of dollars — that have hit the global stage, said Saroha.

Bombay Play’s first multiplayer game Card Party has been downloaded more than 10 million times, and the studio is already profitable. The studio has now raised $2.5 million in seed financing, and it will use the funds to
accelerate product development on multiple live, social multiplayer card and strategy board games, while doubling down on its early hits.

Lumikai’s Justin Keeling said he has never seen a better time to invest in social games since people are looking for ways to connect, relate to, compete, and share with others.

Justin Waldron is a cofounder of Zynga and Playco, which recently raised $100 million to make instant games. He will join Bombay Play’s board. While Bombay Play will focus on global games, the market in India is growing. India has an estimated 365 million gamers among 450 million smartphone users. The country has a frictionless mobile payment system and is now the second-largest global mobile game market, with 5 billion installs in 2019, overtaking the U.S. in downloads. The income generated in the market is much smaller, but it’s growing fast. Market researcher Newzoo estimated that India will generate $868 million in revenue in 2020 and continue to grow at a 22% compound annual growth rate.

The average time spent in games grew 25% in the last year, driven by the cheapest 4G data rates in the world. And roughly 67% of India’s millennials are gamers. The hottest genres are puzzle, action, and adventure. Roughly 90% of the market is mobile games. Real-money gambling and esports are also hot, according to Lumika and Newzoo.

Bombay Play will target Android, iOS, and the Facebook gaming platform (on the PC). The company will make HTML5 games, based on the lingua franca of the web, so the games can pretty much run anywhere that a web browser runs.

“We see HTML5 and going cross-platform is one of the solutions to making social gaming more frictionless,” Jones said. “If you imagine the complicated flow, like I log into a game on Android, I download the game, and I log in through Facebook, and then I find my friends and I invite them. Then they have to install the game and then they have to connect to Facebook. That’s a lot of unnecessary friction for a lot of games to just play with your friend.”

While Facebook calls these games Instant Games, the company will try to make games for the broader market.

“The Instant Game is a proof of concept for this notion that games are not just something you do by yourself,” Saroha said. “It is something you interact around, like how we have seen with images. Image sharing and video sharing is something that gathers people. They act like conversation starters. We believe that games should inherently have messaging. The game developer has to think about that from the start.”

Jones and Saroha already knew Lumikai’s founders Keeling and Salone Sehgal, and so they were comfortable being the first investment. The Bombay Play team is working on a second game called Lockdown Brawl, a card battle game with the name inspired by the pandemic. The game is available as a beta on Android now.