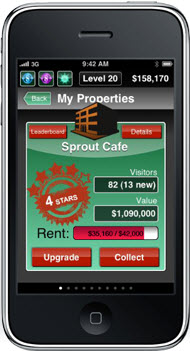 Booyah, the mobile gaming company full of alums from Blizzard Entertainment, just rocketed ahead in the world of location-based gaming.

Their MyTown app, which is kind of like Monopoly for the real world, now has 450,000 users who log-in for 30 minutes a day on average. That’s the average for all users, not just active ones, according to Booyah CEO and co-founder Keith Lee. Lee adds that MyTown has had more than 31 million check-ins from 2.1 million unique real-world locations. These stats could put it ahead of similar location-based gaming startups like Gowalla and Foursquare.

But Booyah takes a slightly different approach from them. Booyah starts with the gaming first, and then incorporates real world elements. It’s more of a classic game than a social network. Location-based networks like Foursquare start from the opposite end: they’re ultimately about socializing and location-sharing and happen to use gaming elements to incentivize people to play.

In MyTown, you get a bit of virtual currency when you join so you can “buy” real places in the game — your local coffee shop, for example. If you manage them properly and upgrade them from time to time, you can earn rent and amass a virtual real estate empire. When you check-in to a location, or let the app know that you’ve visited the real place, you might find a treasure chest with extra cash inside the game that can help you purchase more properties or level up. Booyah’s designers have created a virtual economy inside MyTown, where property prices fluctuate based on demand and how many check-ins they get from other users.

Lee has a couple of recommendations for app developers looking to promote discovery of their work:

He said he’s not advertising inside MyTown yet, although that will come in the next version. Booyah has 18 employees and raised $4.5 million from Kleiner Perkins’ $100 million iFund last year. The company has the pedigree to make real-world mobile gaming work. Its three founders were instrumental in making games at Blizzard Entertainment, now part of Activision Blizzard, like Diablo II and at Insomniac Games with titles such as Resistance: Fall of Man and the original Ratchet & Clank.

Be sure to check out our latest announcements on GamesBeat@GDC, our video game conference taking place March 10 in San Francisco. Electronic Arts John Schappert will give a fireside chat, and OnLive’s Steve Perlman will give a keynote speech.