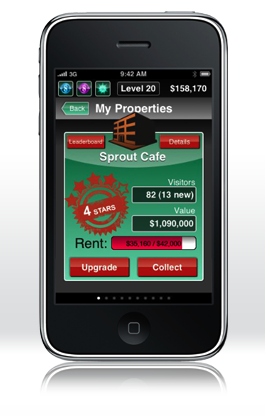 We’ve written about plenty of location-based services that use elements of gaming to keep users glued and reach critical mass. But what about games that happen to use the real world as a virtual playground?

Kleiner Perkins-backed Booyah is exploring this with its latest app MyTown. It’s kind of like Monopoly for the real world.

When you join, you get a bit of virtual currency and you can “buy” real places in the game like your local coffee shop. If you manage them properly and upgrade them from time to time, you can earn rent and amass a virtual real estate empire. When you check-in to a location, or let the app know that you’ve visited the real place, you might find a treasure chest with extra cash inside the game that can help you purchase more properties or level up. Booyah’s designers have created a virtual economy inside MyTown, where property prices fluctuate based on demand and how many check-ins they get from other users.

“We want to blur real and virtual worlds — you’re navigating the real world by checking out pizza places, leaving comments for other people, and you’re also competing with friends with points and on a leaderboard,” said Booyah CEO and co-founder Keith Lee. “There are a couple startups that get press, but no one has become the de facto leader in the space.”

Indeed, there is a whole flock of competitors facing Booyah. Some lean more to the social networking side like Foursquare, which awards badges to incentivize users to “check-in” or temporarily reveal where they are. MyTown is on the other side of the spectrum: it’s more of a classical game than a social network.

Then there are a few companies that have experimented with doing the best of both worlds like Loopt, which is launching a real-world scavenger hunt for users this season in New York, San Francisco and Los Angeles.

Booyah has the pedigree for real-world mobile gaming, although it hasn’t found a hit game yet. Its three founders were instrumental in making games at Blizzard Entertainment, now part of Activision Blizzard, like Diablo II and at Insomniac Games with titles such as Resistance: Fall of Man and the original Ratchet & Clank. Booyah raised $4.5 million from Kleiner Perkins’ $100 million iFund last year and launched an app in July that let users record and share special life achievements.