GamesBeat: How much did we play today?

Homan: You played the prologue today, and then you played one mission in what we consider act two, out of three acts. It’s a big game. There’s a lot of crazy stuff to do. It’s hard to say how big the game is. There’s a lot of amazing activities, tons of side missions, tons of challenges.

Winkler: I think Paul said something like 30-35 hours if you’re going right through the main plot missions. There’s so much side content, though.

Homan: The side missions are some of my favorite parts of Borderlands. That’s where you get to create a really strange new character that’s just — what is this person asking me to do? I guess so? Now I love you, now you’re great? You can also play with the game tonally. You can find side missions that are really dark, or side missions that are kind of silly, or occasionally ones that are poignant, emotional. We have a chance to be more experimental. It’s a really good variety of missions.

Above: You can level up Fl4k as much as you want in Borderlands 3.

GamesBeat: As writers, do you guys race ahead of everyone else, like the artists? Do you finish your part of the work early, or do you have to loop back because they’re catching up and building on your work?

Homan: We’re involved in every step of the process. We’re doing different things at different times. In preproduction we’re helping artists and designers dream up missions and characters and things like that. During main production we’re writing missions and filling out battle grids. But a mission’s never done until it ships. We like to make the mission the best possible version of itself, and that involves a lot of collaboration and playtesting. Sometimes we’ll play a mission and think, “We have to do this. This is so cool.” We’ll revise the script and re-record some stuff. We want players to get the best possible version of something.

GamesBeat: What would you say is the goal? Is it always humor, or do you look at it in different contexts? What do you as writers really want people to get out of this?

Winkler: Borderlands is known for its humor, and that’s the fan expectation. But the best thing about humor is that if you keep people laughing, they don’t expect to cry in the next moment. You have a lot of tools in your toolbox to mess around with them. One thing I’m happy about with Borderlands 3 is that our writing team was larger and had a more varied sense of humor. Even just Danny and I have very different senses of humor. When we try to make each other laugh, there’s a really interesting result there.

Homan: As writers, the thing we dream of doing is creating engaging characters. Coming in as fans of Borderlands and Borderlands 2 — Ellie is one of the most amazing characters. Any time I hear her speak, it makes me so happy. When you sit down to write Borderlands 3, you think, “Who’s that next character going to be?” The one who just catches fire, where the fans say, “Oh my God, Lorelei is amazing.” That’s what we really strive to do.

Winkler: The best humor is character-based, right? Once you have a strong character and you understand their voice, you can put them in increasingly strange situations and have it make sense.

GamesBeat: When people would say it’s over the top — it doesn’t sound like that’s necessarily the goal.

Homan: The goal is to surprise people, to do what’s not expected. That’s what so much humor derives from. I think I know exactly the way something’s going, and then it takes me in a totally different direction. That’s the engaging thing.

Winkler: Players are intelligent these days. They can recognize when something is wacky for the sake of being wacky. But if it’s grounded in the logic of the world, and you can understand how you stair-stepped to this insane final point, you’re more likely to accept it. We want to make sure that players never feel pandered to.

Homan: When you meet a character in the Borderlands universe, your first question is, “How the heck are you still around? How did you survive? Who are you?” Like Sam says, when a character tells you that they need something, it’s fair game. Some people need to survive. Some people need to forget about the awful things that are all around them. That’s part of where Borderlands gets its charm and its dark humor. It’s a humor of catharsis and of survival. “If I can laugh, I can get through the day.” 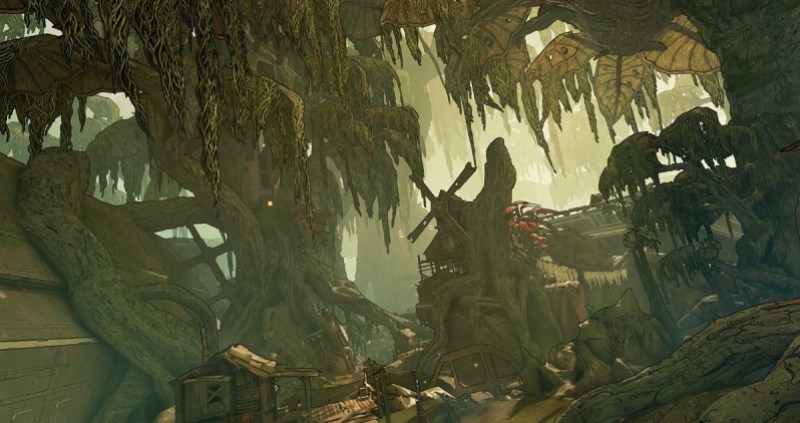 Above: Eden-6 is an overgrown place.

GamesBeat: How much bigger would you say this is compared to the previous games, as far as the amount of writing work?

Homan: When we do a lot of our writing, like I say, we think a lot about how we can surprise players. And not just in hour one, but in hour 10 or going on throughout the entire game. Our battle grids are humongous, because people love the enemies in Borderlands. They’re totally insane. They want to hear the psychos say really strange, weird things. They want to hear a punk say, “My chili recipe dies with me!” We want players to never think they’ve heard everything a character has to say.

GamesBeat: Those were some of the funniest lines, those dying remarks.

Winkler: There’s a lot of character in those moments.

Homan: There are moments where you hear someone dying and you think, “Oh, that’s why you were doing that. That’s different. I didn’t expect that. How did you know Claptrap?”

GamesBeat: It sounds like you had a lot of fun with this.

Winkler: We were both huge Borderlands fans coming on the project. It was a real honor to be able to contribute to the franchise. I’m going to get a vault symbol tattoo now that we’ve gone gold. That’s something that’s going to be with me forever. [laughs] I’m proud of what we’ve done.

GamesBeat: It seems like it’s gotten pretty good buzz over the year. People are getting really excited about the trailers and so on. Did you think that the slices of the game that got shown in the trailers were the right ones for any particular reason, to help it go more viral?

Homan: I think people got really excited about seeing Promethea for the first time. We haven’t quite seen that level of technology in a city. People were curious about Promethea from a lore point of view. This is the planet where Atlas found the Eridian tech that gave them their power, which is why they came to Pandora in the first place. Fans have seen a decent amount of the cool stuff that’s in Borderlands 3, but they haven’t seen anything close to all of it.

Winkler: One of the most important things is that we held off on showing the game until we were extremely confident of what was in the game. We knew we had hit the very high bar we had set for ourselves. That very quick turnaround from announce to release is a good sign for fans. 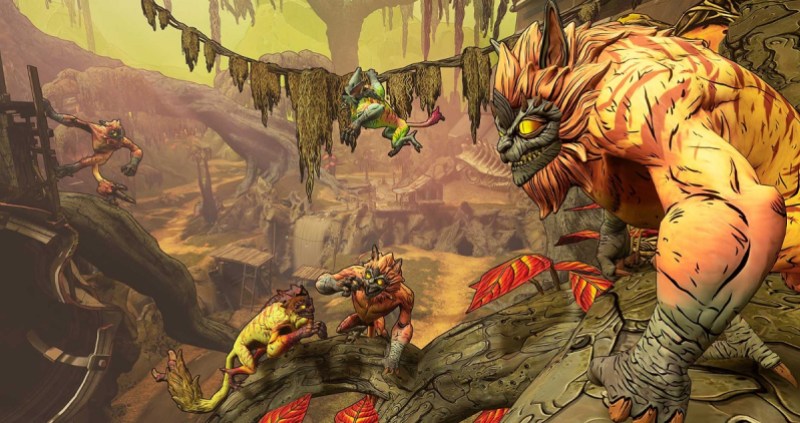 Above: Creatures of Eden-6.

Homan: I’m excited to play the game, because I know there’s so much stuff — even though we were both on the project since the very beginning, there’s so much stuff that we haven’t seen. There’s going to be unique interesting guns, or some kind of special enemy. “Okay, didn’t expect that?”

Winkler: There’s also just so much content. One of the running things that happens on the writing team, someone will chuckle and say, “Who wrote this?” And someone else says, “You did, months ago. Good job!” [Laughs]