API.ai, an intelligent speech interface company for apps, devices, and the Web, is announcing an integration with Slack that could be a major stepping stone in deepening Slack’s usefulness in the enterprise beyond chat.

The AI startup has been building speech products using machine learning for six years now. It launched the first speech assistant app, even before Siri, and now assistant.ai has 30+ million subscribers and a higher user rating than all the other major voice assistants on the market (Google, Siri, Nuance, etc.). Now API.ai has launched what could be an awesome feature for Slack: a developer tool to create truly conversational bots that rely on NLP (natural language processing).

Bots are the new apps

Conversational interfaces have been around for some time. Do you remember SmarterChild? Every teen of the AOL Instant messaging generation should. You could ask him (at least, I always thought it was a him) for movie times and weather in your area. You could ask him about his favorite song or food. ‘He’ was a brilliant time-waster, and in general, kind of a parlor trick.

*It was an often hilarious parlor trick, if I recall — and what a precursor for what’s coming this year in chat.

The rapidly expanding chat app and messenger market is anything but a trick. In fact, messaging apps have recently surpassed social networks for monthly active users. In the research game, when we see major markets intersect like this, there are significant macro forces at play — and the results ripple throughout every wave of the innovation economy that supports it. In this case, that means investors and entrenched players in messaging. Slack is a big part of this economy on the enterprise side, at least in terms of potential future (over) value. It even launched its own venture fund to push this wave forward. 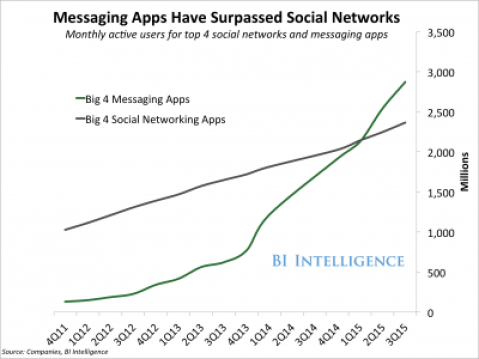 There’s rumblings of Facebook kicking the tires of a bot ecosystem through Messenger. Kik did so last year and is already seeing massive growth. Bots will be big in 2016.

The fundamental thinking around the bot ecosystem’s opportunity flies directly in the face of what’s happening with mobile phone engagement. Somewhere around 90 percent of a mobile phone user’s time is spent on email, their preferred social network, and messaging. That’s not to say apps are dead — but the windows of opportunity for competing for a mobile user’s attention outside of those “big 3” apps is shrinking. It’s the driving force for the $100B+ mobile app enabler ecosystem we’ve been covering at VB Insight.

Bots are also going to be a big reason why single-use apps will be a thing of the past. When you go to Levi’s Stadium in Santa Clara, you can have food brought straight to you via the Levi’s Stadium food delivery app. Great. Now I have to get out my phone, search for the app, put in my password, create an account, add my credit card…

Wouldn’t it be cooler just to chat with a Levibot?

That’s sort of how API.ai functions. The main benefits of using it over other chat bots is that there’s no need for users to memorize commands. API.ai-driven bots can support multi-step/clarifying comments, making chats more contextual. It’s also super easy to build them with no coding required. I built one with CEO Ilya Gelfenbeyn over the phone in a minute or two.

The company has deep expertise in the enterprise with other AI products in various stages of production. They have large clients in IoT (which they couldn’t disclose, but alluded to major players in smart home hubs, wearables, and coming-soon competitors to Amazon’s Echo device), TV set-top boxes, voice-enabled mobile apps, in-car voice interactions, enterprise solutions (CRM, warehouse management, etc.), and even robots — having processed over 2.7 billion API requests so far, with 20,000+ developers working on adding voice or text interaction capabilities to their products.

This is a critical differentiator for them. So yes, while it’s neat you can order a Lyft via Slack (actually, that’s not neat at all), imagine how much money a company could save in employee on-boarding, for instance, by automating the process via chat. API.ai has been working with enterprise resource management tools and CRM systems to make this a reality. 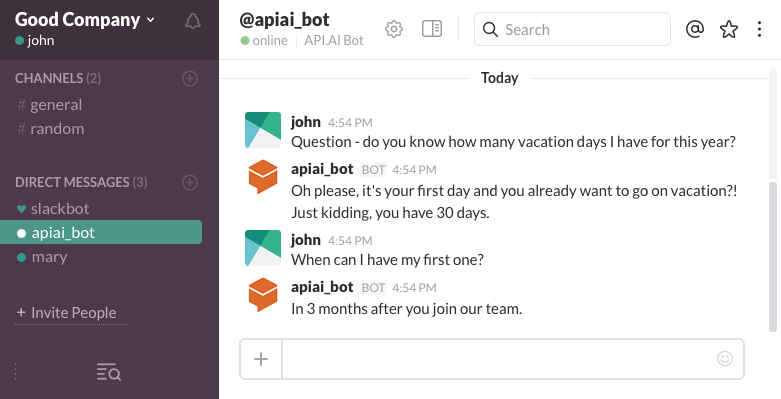 Entire business workflows can be viewed and coordinated inside of the messaging platform. With such functionality, Slack aims to fulfill its lofty promise to redefine the way we work and communicate.

Silicon Valley is experiencing a growth vs. monetization dialectic as of late, spurring massive public markdowns and some less-than-rosy news for tech workers this year. Slack has firmly been on the growth end of that spectrum, but it’s also seen plenty of trough of disillusionment fodder. What will pull Slack out of the backlash? Maybe AI that works.

This post on the Mixpanel blog provides an excellent framework for the main components of the bot opportunity, and how Kik is seeing massive engagement and growth on it already. If you’re interested in this space, you should go read the whole thing.