The Turing test is a test, developed by Alan Turing in 1950, of a machine’s ability to exhibit intelligent behavior equivalent to, or indistinguishable from, that of a human. When I joined Slack, my vision was to help developers build bots that pass the Turing test 2–3 times a day. As time passes, I understand the “beer test” might be much more important.

So what is this beer test?

Now the Beer Test is much less complex than the Turing Test: When I worked in New Zealand, I was asked to interview several engineers and product managers. In addition to assessing their tech and product skills, I had to answer this question: “Would you go out for a beer with this person?” (If you’re not into beer, substitute sushi or hummus or hanging out.) It’s a simple question but one of great depth:  Do you think this person is someone you’d want to work with every day? Is this a person who will not only be effective but is also a good person? At Google we called it Googliness, although I am not sure that it has an accurate synonym. I would say that a person who passes the beer test is a delightful, interesting, and fun person.

How to make your bot pass the beer test

Here are some best practices collected by our team from an internal Slack bot hackathon and working with bot developers: 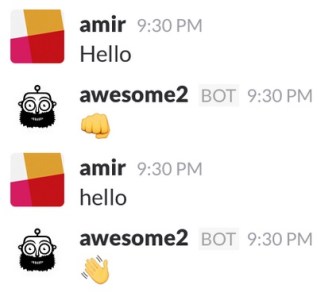 Why strive for delightful bots, not humanized bots?

There are several reasons service providers should build delightful bots rather than humanized bots:

As we move to the conversational office era, it is time to take the step forward and provide your service as a bot — not an impersonator bot, but a friendly and approachable bot. It’s easy peasy.