Box is officially launching its G Suite integration for all users from today.

The cloud storage and team collaboration platform and Google first unveiled the integration at Google Cloud Next in July, though the public beta release wasn’t announced until late August. The program has remained in beta since, with new applications for access no longer accepted.

Now Box for G Suite is being launched with general availability for all users, and the company said it expects the full rollout to be complete by mid-January 2019.

While Box and Google have launched a number of partnerships over the years, the Box for G Suite integration is notable in that it allows Google Docs users to create, edit, and save their documents from inside Box — they no longer have to use Google Drive. This is similar to a partnership announced between Dropbox and Google earlier this year. 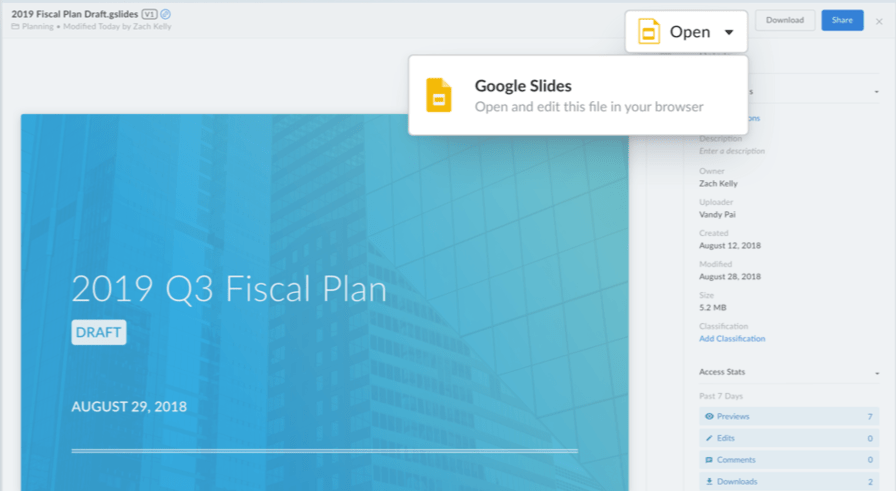 Above: Box for G Suite integration: Google Slides inside Box

Back in October, Google launched a new feature for G Suite Gmail Add-ons called Compose actions, which serves as a direct artery into enterprise applications like Box. The add-on basically allows Gmail users to attach files from Box and download email attachments to Box directly from the Gmail app.

While such close-knit tie-ups may seem counterintuitive, given that Box and Google compete on many fronts, these integrations actually take advantage of the big crossover between their respective services in the workplace. Indeed, many companies subscribe to both G Suite and Box, so bringing the two services together makes Google and Box’s customers’ lives just a little bit easier.

“The future of work will be defined by best-of-breed applications that work together to make it incredibly simple for people to get their work done faster, more easily, and more collaboratively than ever,” noted Box’s chief product officer, Jeetu Patel. “Together, Box and G Suite not only help people be more productive, but we also ensure that enterprises can centralize, manage, and secure their data in the cloud.”