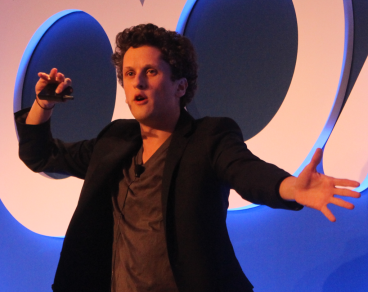 The first time I met Box.net chief executive Aaron Levie, he showed me a magic trick with a deck of cards.

A year later, the 26-year-old was standing on stage (in his typical electric orange sneakers) in front of 350 customers and press at his company’s first annual conference, BoxWorks, held yesterday in San Francisco. He had just turned down a buyout offer worth more than $500 million. That evening, Box.net hosted a party where the entertainment was one of his favorite bands from middle school, Third Eye Blind.

Levie has come a long way since middle school. In fact, he and his company have emerged as iconic figures for the new wave of enterprise technology.

Like Steve Jobs, Marc Benioff and Mark Zuckerberg, Levie is part inspirational leader and part visionary. More to the point, Box.net is part of a new wave of startups that are bringing new ways of thinking into the enterprise, borrowing from Apple’s consumer playbook. For instance: make something simple, easy to use and insanely useful, something that you would have never realized you needed, but can’t live without today. It’s a totally different way of working than most enterprise technology companies.

“In the last 10 years, it feels like something fundamental is changing, consumer computing is leading the industry,” Andreessen Horowitz co-founder Marc Andreessen told VentureBeat. (Andreessen Horowitz is one of Box.net’s investors.) “Consumers get the hottest mobile devices years ahead in advance before adoption in the enterprise.”

Box.net was started in 2005 in a garage by a bunch of University of Southern California students. It has since gone on to capture the attention of investors and massive companies. The enterprise-focused cloud storage provider went from five-figure revenues in its first year to millions by the time it closed its first round of funding from Draper Fisher Jurvetson in 2006 and more than $10 million by its fourth round in February, 2011, Meritech Capital managing director George Bischof said.

Today, the company has more than 7 million users and 77 percent of the largest companies in the world on the Fortune 500 list have deployed its service in some form. Box.net just closed an extension to its most recent funding round worth $50 million that includes its existing investors — including Draper Fisher Jurveston, Andreessen Horowitz and Meritech Capital, all Facebook investors — and also a new investment from Salesforce.com. In total, the company has raised more than $130 million in funding.

“We were kind of kicking ourselves for not getting in earlier, but they were below our revenue threshold,” Bischof told VentureBeat. “We met a year before, and we saw it had the potential to be one of those mega-spaces that affects everyone.”

And half of the $130 million is still in the bank, Draper Fisher Jurveston partner Josh Stein told VentureBeat. The most recent round is an extension to its fourth round of funding, which had already brought in $48 million. Box.net is gearing that funding toward infrastructure costs and opening a third data center to run alongside its existing two centers to manage the load from its new customers.

Now, using all those new enterprise applications is basically a prerequisite for an investment by Andreessen Horowitz, Andreessen said. Every company funded by Andreessen Horowitz in the past year has used Box.net to some extent, along with a mishmash of the other enterprise 2.0 applications like Google Docs and Workday, he said. Most of the time they are either free to try out — in the case of freemium apps like Yammer and Box.net — or are dirt cheap.