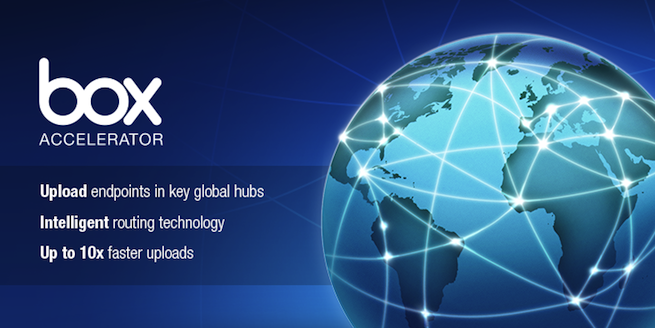 If you’ve ever worked abroad, you’ll know that uploading files can be a painfully slow process.

As it readies for international expansion, Box, the Silicon Valley-based cloud storage startup, has released a product update it says will make it 10 times faster than competitors Dropbox and Google Drive.

During a recent roll-out in nine locations around the world, Box reported that it processed file uploads at a mega speedy 7 megabytes per second.

These speeds will be an advantage for Box as it pushes into the enterprise. “It’s a highly strategic move for us,” said Box’s vice president of operations, Stefan Apitz, who told me that about half of Box’s activity comes from outside of the U.S.. To lead its global expansion efforts, the company brought on a new general manager of Europe, the Middle East and Africa, David Quantrell. Prior to joining the startup, Quantrell led European operations for McAfee, HP Software, and Mercury Interactive.

CloudBeat 2012 is assembling the biggest names in the cloud’s evolving story to learn about real cases of revolutionary cloud adoption. Unlike other cloud events, customers — the users of cloud technologies — will be front and center. Their discussions with vendors and other experts will give you rare insights into what really works, who’s buying what, and where the industry is going. Register now!

“As Box continues to expand internationally, it’s critical that we provide all our customers with a consistently great experience and rapid data access,” said Box CEO Aaron Levie in a statement.

Box said that its speedy technology won’t be easy to replicate by the other players in the market. Its algorithm records every user transaction, and determines the fastest routes for future transactions. It gets smarter over time and won’t be highly affected if you change location. The company has already patented its algorithm, so Apitz couldn’t reveal the nitty-gritty details.

Large enterprises like Sony, Six Flags, and the American Hospital Association are already using the new product. Today, it’s available for free to all business and enterprise customers, and it takes about 15 minutes to deploy. Developers can access the API to develop features and applications, using Box as back-end storage. For more information on the new release, check out the company blog.