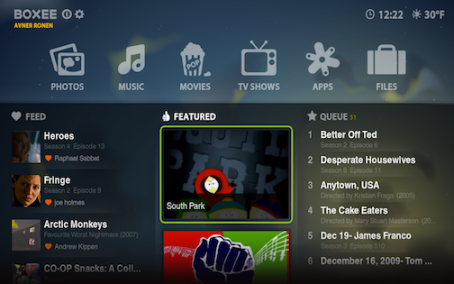 Media center software maker Boxee announced the public launch of its Boxee Beta software, today, after only a month in private beta.

The downloadable software allows users to connect their computers to any TV and instantly stream different types of media, including TV shows, music and movies. The software also uploads any media content present on a computer’s hard drive so that it can be accessed and viewed on the TV. This includes personal pictures or home movies, which now can be viewed and shared with friends or family right in your living room. The beta version is currently available for Mac, Windows and Ubuntu.

The company also launched a DVR-type feature called bookmarklet, which allows the user to save a video for later viewing. According to CNet, this is currently limited to a handful of sites, including Vimeo, Blip.tv, YouTube, Break, Metacafe, Viddler, The Onion, CollegeHumor, DailyMotion, HowCast, MTV, FunnyorDie, and Gametrailers. That covers most of the big ones, at least.

Today’s launch is just one of many recent Boxee announcements, including its partnership with D-Link to produce its Boxee Box. The device would eliminate the need to connect a computer to a TV to consume streaming media. Rather, users would have a designated set-top box that they could search to consume the same media found via the software.

According to the companies blog post earlier today, they are making a joint announcement with NVIDIA and D-Link revealing that the Boxee Box is powered by the Tegra 2 (T20) platform. The platform will make for a seamless user interface, and play 1080p video as well as Adobe Flash 10.1.