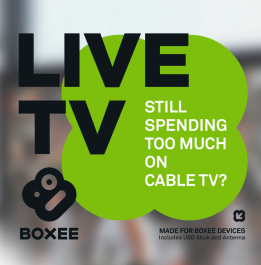 Boxee may be planning to launch a new DVR subscription service aimed at users who’ve purchased its new Live TV stick, according to a new survey the company sent  to users over the weekend.

The Boxee Box is a streaming set-top box featuring Boxee’s open-source media software, which transforms televisions into internet connected media centers. The company launched its Live TV tuner stick back in January, which is a $49 add-on that acts as a high-powered HD antenna to give Boxee Box owners access to local channels like ABC, CBS, Fox, CW and NBC with no monthly fee. The stick currently doesn’t have any DVR capabilities and Boxee has openly discussed the possibility of adding it in the future.

If Boxee does launch a subscription based DVR service, it would likely extend beyond just the local free HD broadcast stations and include TV channels from cable and satellite services. The survey released this weekend indicates that the DVR subscription service could cost anywhere from $5 to $15 per month. Specifically, the survey asked owners of the new Live TV stick “How much would you be willing to pay for the ability to record 300 hours of TV.”

There are two very big factors that make me believe Boxee could followup its Live TV stick offering with a DVR subscription service. First of all, the company isn’t afraid to adjust its business strategy to create a successful and profitable product, which is why it’s ceased providing the Boxee software to PCs. Second, the company recently started asking its users to contact the FCC in regards to a rule change that would encrypt the free HD broadcast channels that allow its Live TV stick to provide live television to the Boxee Box.

Boxee is definitely interested in exploring the DVR space, but it’s unknown at this time whether it will move forward with a DVR subscription service.