D-Link’s Boxee Box is an internet-connected console for television. It’ll play Hulu content, CBS, ABC, Netflix, YouTube, and lots more onscreen. But with all these options, surfing through menus with a TV remote will try your patience.

The keyboard was announced a few minutes ago in a blog post tied to this week’s 2010 Consumer Electronics Show (CES). The device is meant to be used from a living room chair or couch while watching TV. 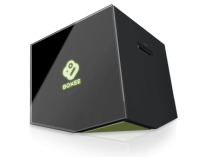 “When we started designing the Boxee Box remote we wanted something simple like the 6-button Apple Remote,” a Boxee employee identified only as Andrew wrote. “As we began adding features to the beta it became obvious that for people to really get the most out of the box, it was going to need to do more than just point and click.  Rather than subject anyone to another on-screen keyboard we decided the Boxee Box should benefit from a full QWERTY keyboard like you might have on a mobile phone.”

Pushing alphanumeric input onto a separate keyboard adds more hardware costs to the product, but the resulting setup — a QWERY keyboard and minimal-function remote — looks a lot more welcoming than yet another all-in-one remote. Engadget has a hands-on review of Boxee’s new gear.