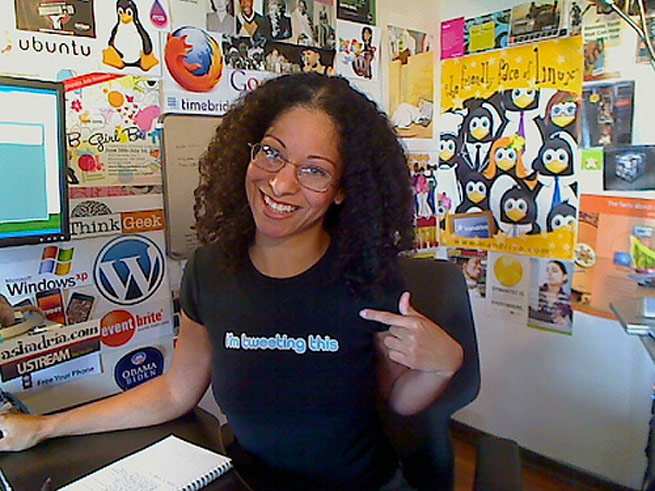 Email delivery company SendGrid has fired developer evangelist Adria Richards (pictured above) after she outed a developer who was allegedly making sexual jokes during a conference, via Twitter.

The developer in question was fired by his employer, PlayHaven, after Richards posted his picture and a few details about what he said. VentureBeat broke the story last night.

And the latest: Adria Richards’ statement

Effective immediately, SendGrid has terminated the employment of Adria Richards. While we generally are sensitive and confidential with respect to employee matters, the situation has taken on a public nature. We have taken action that we believe is in the overall best interests of SendGrid, its employees, and our customers. As we continue to process the vast amount of information, we will post something more comprehensive.

At first there was some concern that, although this was showing up on SendGrid’s Facebook account, the company may have had its social media accounts hacked.. SendGrid was under DDOS attack , which means that some fairly sophisticated hackers are focused on the company, and it is not beyond the realm of possibility that they had cracked into SendGrid’s social media accounts.

However, SendGrid has also confirmed the firing on Twitter:

And late on March 21, the company confirmed the termination on its blog:

What we do not support was how she reported the conduct. Her decision to tweet the comments and photographs of the people who made the comments crossed the line. Publicly shaming the offenders – and bystanders – was not the appropriate way to handle the situation. Even PyCon has since updated their Code of Conduct due to this situation. Needless to say, a heated public debate ensued. The discourse, productive at times, quickly spiraled into extreme vitriol.

A SendGrid developer evangelist’s responsibility is to build and strengthen our Developer Community across the globe. In light of the events over the last 48+ hours, it has become obvious that her actions have strongly divided the same community she was supposed to unite. As a result, she can no longer be effective in her role at SendGrid.

In the end, the consequences that resulted from how she reported the conduct put our business in danger. Our commitment to our 130 employees, their families, our community members and our more than 130,000 valued customers is our primary concern.

This is a fairly shocking move. While on the one hand there is legitimate concern over the public outing of a developer for what even by Richards’ account are fairly innocuous jokes, there’s also a long-standing boys-club atmosphere around the tech world that lends itself to certain kinds of salty, crude, and sometimes inappropriate behavior, and it’s not hard to imagine that Richards finally felt like she needed to take a stand.

On the other hand, her job at SendGrid is developer relations.

Like it or not, reality is that developers are mostly male, often young, and sometimes crude. And they have reacted with startling vigor and venom at one of their own being fired for comments about dongles and forking — some veering way into crazy criminal territory and issuing rape and death threats.

It’s easy to see that the company may believe Richards will have a difficult time doing her job after this. And it’s also easy to see that they may see this as a quick fix for the DDOS’ing attacks on the company’s website and services. But the easiest thing of all to see is that there may be multiple lawsuits about this entire issue before we’re done.

I wonder if this is legit. If so, this is one hell of a mess. Everyone’s going to lose here: SendGrid, Adria, the community, the “jokers”.

And from Jason DePriest:

The dude shouldn’t have been fired and neither should Adria. Thanks American Corporations for shitting all over employees. Maybe the two comapanies should just swap employees instead of putting two people out of work during a recession.