It’s not easy to make your own beer. It’s also hard to brew a good batch of beer, and even harder to duplicate that batch for future consumption. And simplifying the process so that it’s as effortless as baking cookies has been near impossible because of all the factors involved with the brewing process, including fermentation, location, temperature, and of course the availability of equipment itself.

But with the debut of the Brewbot — a personal beer making machine that not only brews the beer, but also tracks all the ingredients used — some of those problems have been solved. The machine eliminates many of the rogue factors in brewing, even for those that don’t know the first thing about beer. You control everything from your smartphone rather than the machine itself, which also allows the startup to push out notifications for when your brew is finished or ingredients are running low, and to provide a way to eventually track your brewing activity. (And on top of that, it will even print custom labels to stick on the bottles.)

“Anyone can brew beer now. It’ll hold your hand as tightly or loosely as you want,” Brewbot founder Chris McClelland said in an interview with VentureBeat. He added that while Brewbot certainly makes home brewing easier, the world likely won’t see it take hold until sharing beer, and brewing secrets, can be shared openly, free of legal regulations and scrutiny.  “What’s needed is a network. Beer is always better when shared. And that means coming up with a way that gets breweries working together.” 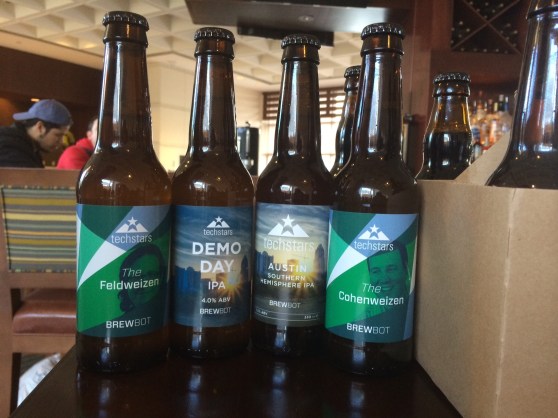 Above: A collection of beers made with the Brewbot following the startup’s graduation from the Techstars Austin incubator program. 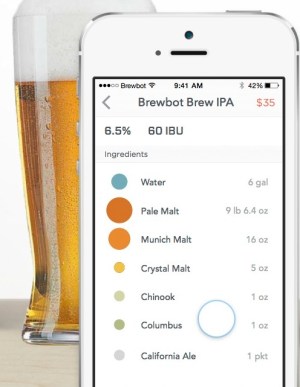 Above: An early screenshot of the “DNA” of a beer created with Brewbot.

To do that, Brewbot is introducing a tech for compiling beer recipes, which it refers to as “DNA of Beer” cards that show you exactly what’s in the beer you’re drinking, its alcohol content, and the basic instructions for how to make it. The idea is to make these cards sharable, allowing for people to “download” beer as long as they have a Brewbot and the necessary ingredients.

To give you some idea of why these are important, McClelland applied the Beer DNA card to an IPA from Pennsylvania-based craft brewer Russian River, which was then used to brew the beverage.

This took place shortly after McClelland pitched Brewbot to investors on stage at the Techstars Austin demo day event last week. As soon as pitches ended, everyone (including myself) walked over to sample the brew. I hate IPAs, but this one was fresh and full of flavor. I wanted another.

So did plenty of others.

“Beer DNA is going to make it possible for you to drink a beer from small craft breweries in tiny towns and cities all over the world,” McClelland told me. It was at this point that I had the “a-ha” moment he was undoubtedly trying to convey to the crowd during his pitch. Immediately I thought of how nice it would be to drink a Dos Perros from Nashville-based Yazoo. Then I started thinking about a coffee stout I had from a local brewery near Atlanta that I forgot the name of because I was unlikely to ever find it anywhere else.

“The best part is, you don’t have to pay for shipping or deal with alcohol regulations or laws. You just send the beer instructions to Brewbot and enjoy.”

The ‘Keurig’ of beer, except not

One big thing that’s holding back the home-brewing revolution is cost, specifically the $2,800 to purchase a Brewbot of your own. McClelland explained that the machine is built by hand, and that the company is intentionally keeping prices low. Some have suggested that the startup raise the price of the Brewbot, which McClelland told me he’s not necessarily keen on.

But since the basic goal of a business is to generate money, he does have an alternate plan for how to do it. Naturally, I assumed the Beer DNA cards would be an encrypted and otherwise closed technology to ensure local craft breweries don’t get nervous about handing over the secret recipe for their products. But no, Beer DNA is open-source and should remain that way, according to McClelland.

“We’ve certainly thought about it, but the DNA has to stay open. We don’t want to become a Keurig, and beer should never have DRM,” he explained. Keurig is a company that produces a coffee maker that brews a single-serving of coffee by inserting small, disposable pods of sealed ground coffee (aka K-cups). As Keurig popularity took hold, competitors started producing their own knockoff K-cups, which prompted Keurig to build a brand new coffee maker called Vue that uses a new set of pods you can’t easily reproduce.

Brewbot is fine with people sharing Beer DNA openly — because as the history of Internet piracy has shown, if someone wants the recipe for a secret beer they’re going to get it one way or another.

So how will Brewbot make money? McClelland said there are a few different avenues the startup plans to explore. For instance, Brewbot wants to sell you (and other local craft breweries) the ingredients for specific batches of beer. And if you hadn’t realized, there are tons of different ingredients to choose from for each component involved in brewing (grains/malts, hops, yeast, clarifying agents, etc.).

“I love the idea of making breweries smarter, and helping them branch out [to new customers outside their city],” he said. “But yeah, I’d be OK with becoming the iTunes of beer.”

From a consumer standpoint, this might mean that Brewbot is shipping a “beer kit” package from a particular brewery you love that contained the ingredients you need to make several batches. This is far more reasonable that having a local brewery send you a case of bottled beer, which can be expensive to ship due to both the weight of the package and added precautions taken to ensure it arrives in one piece. Also, there might be alcohol sales laws to contend with, which might make beer from certain locations impossible to purchase remotely.

Point being, Brewbot has enough of interest from consumers to take its time parsing through the business model for the best fit — having completed a successful Kickstarter campaign last year and lots of new orders for its brewing hardware, according to McClelland.