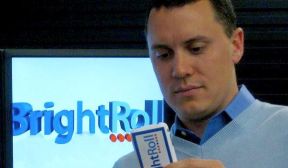 But wait, there’s more: BrightRoll also announced today that it has been profitable for nearly the entire last 12 months. Sacerdoti had hinted at this last fall, when he told TechCrunch that while video ad rates were dropping, his company’s total revenue was up 84 percent over the previous year. Rather than burning through it, the company will use this round of financing to expand its technology platform, beef up worldwide advertiser and publisher operations, and hopefully increase its leadership position in America.

In the past few months, BrightRoll has added behavioral targeting to its technology platform. The company also added an option for advertisers to only pay for videos that are watched to completion by viewers.

Sacerdoti told me in a long phone call today that it’s not just BrightRoll, it’s video advertising as a whole that’s taking off. “The biggest theme we’ve seen over the past 12 months,” he said, “is that video advertising is being served for any free content, not just video content. Anywhere someone can serve a video ad, you’ll see a video ad. Video ads are going to be much more broad than TV will be.”

That bodes well for video ad networks like BrightRoll, as well as its competitors such as YuMe and Tremor Media. The thing about video ad networks is, as an Internet user, you’re not really aware of their existence. You just see lots of video ads all over the place, without being told who’s serving them. “It’s like when you watch Project Runway,” Sacerdoti said. “You know you’re watching Bravo, but you don’t think about whether or not it’s Bravo that sold the ads. Often it’s not.”

“I think by this time next year the majority of the top five to ten video properties by any measure will be aggregator networks,” he said. “The best example for this is display advertising. They’re by far the largest in reach and spending — Google, Yahoo, Microsoft, AOL and 10 ad networks make up the top fourteen. But what we’re seeing pretty clearly from the advertising community is that the preferred ad medium is video. All things considered, advertisers would almost always prefer to run a video to talk to their customers.”

Why is Scale putting $10 million into BrightRoll? “The online video ad market will grow to billions of dollars over the next few years by disrupting the $70 billion television ad market,” Theis said in a prepared statement. That’s three and a half times the size of Google’s annual ad revenue, and more than twice the total $30 billion online ad market. The most strategic Internet investments are those that compete not with other Internet businesses, but with the much larger amount of money still being spent offline.