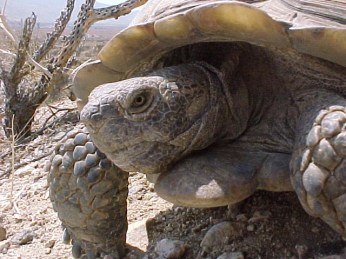 Solar power provider BrightSource’s $250 million IPO is now riding on whether the company can wash mirrors and care for turtles.

The solar power tower company — which use an array of mirrors to heat water that powers a conventional turbine — filed to go public Friday to raise up to $250 million. One of its largest risk factors cited was whether the company could effectively wash and keep those mirrors clean every twoweeks. The company lists the mirror cleaning technology as “largely unproven,” and said it may perform well below expectations.

The U.S. federal Bureau of Land Management also slapped BrightSource with a suspension on its largest Ivanpah solar power tower project, which is worth $2.2 billion, because the agency found desert tortoises on the proposed site for the Ivanpah project. BrightSource stopped phase 2 and 3 of its Ivanpah tower construction until it finds a new place to house the desert tortoise, which is classified as vulnerable by the International Union for Conservation of Nature.

BrightSource Energy’s power tower will be around 450 feet tall and use 173,000 heliostats — devices that mount two mirrors and move them to direct sunlight to the top of the tower. The new plant will generate 392 megawatts of power — enough to take around 90,000 cars off the road over 25 years, according to Google. The average home in the U.S. uses around 920 kilowatt-hours of electricity each month.

BrightSource already shaved 500 acres (and about 50 megawatts) off of its original Ivanpah blueprints to accommodate the desert tortoise last year. The land involved in the deal, located in California’s Mojave Desert, has also raised concerns from environmentalists. Senator Dianne Feinstein has even pitched legislation to turn some of the region into a protected monument to prevent further renewable energy development in February last year.

The Oakland, Calif.-based company has 284 full-time employees and 23 freelance employees, according to the filing.