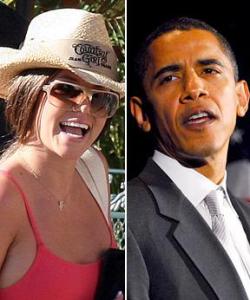 President-elect Barack Obama has had an incredible year. However, according to Yahoo’s 2008 search rankings, Obama’s history-making presidential bid still didn’t attract as much attention among web browsers as pop star Britney Spears and World Wrestling Entertainment in the world of overall search terms.

Ms. Spears managed to rise from the glittery ashes with three MTV Music Awards, a new album and her first #1 hit in a decade, as well as a documentary chronicling her rise and fall and rise again. This marks Britney being the top Yahoo search for the past seven out of eight years, which is roughly half of my youngest brother’s life. God save us all.

Even with Wall Street falling down, steady iPhone sales and the fighting in Iraq and Afghanistan, the top 10 searches include Miley Cyrus, who’s literally shed her Disney sweetheart image, American Idol, the show that elicits more rabid votes than presidential elections do, and Angelina Jolie, who seems to understand more about global affairs than Sarah Palin. The massive online game RuneScape, Japanese anime Naruto, Jessica Alba and Lindsay Lohan round out the celebrity-centric list, which is hopefully not too reflective of the world at large (Yahoo’s share of the search market is around 20 percent).

Yahoo also has rankings for most searched news stories, politicians, Olympians, celebrities-in-training, economic buzz words, women and notable deaths. By the way, Ask.com also just released its top 2008 searches, a list that’s hilariously more practical than Yahoo’s. Ask.com’s #1 search is for “dictionary,” followed by “MySpace” which is ironic given the spelling atrocities committed on that site. Its third place equivalent of Yahoo’s Obama? Google. How maverick.