Brizzly, the status update client from the makers of Google Reader, has stepped up to become the second big app to support Twitter lists. (Seesmic was the first earlier this week.)

Lists are what they sound like — groups of Twitter accounts that people can recommend to others. They’re usually centered around a theme like entrepreneurs or foodies. Twitter rolled them out to their entire community last week to help users find other interesting people to follow. Jason Shellen, who is the CEO of Brizzly’s maker Thing Labs, said the feature should be finished by tomorrow night.

In Brizzly, you’ll be able switch from reading your main Twitter stream to scanning tweets from specific groups of people. (See the example below with VentureBeat’s Twitter list.) You can also create, sync and navigate Twitter lists from the client. Brizzly stores historical tweets, so you can scroll back into a list as far as you like.

Brizzly had a very similar “groups” feature before but it was for private lists of people. If you’re a Brizzly user that has created a group before, it will be marked as “private” and you can change that if you want. Lists, by contrast, are public and are meant for sharing with others.

Thing Labs was spun out of Dogpatch Labs, a startup incubator created by Polaris Venture Partners. 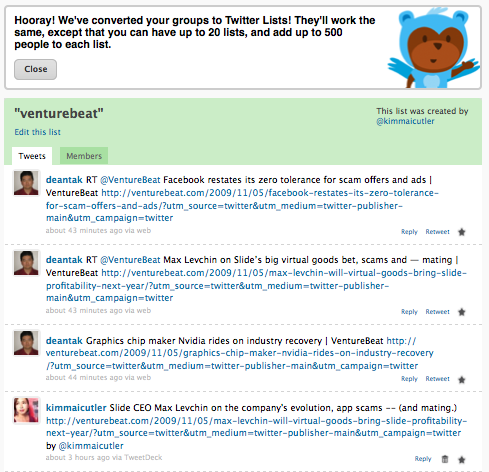