The Singapore-based company said its chips will be the heart of an entire ecosystem of Wi-Fi routers, residential gateways, enterprise access points, and client devices that deliver faster Wi-Fi. It’s just in time for households that are consuming far more internet content than in the past. Products based on the new standard and the chips being announced today could appear in 2018 or 2019.

But 802.11ac Wi-Fi can’t handle much more than five to eight devices. Broadcom’s Max WiFi chips — BCM43684, BCM43694, and BCM4375 — are designed for tasks like streaming real-time video. 802.11ax has been in discussion for a few years, and the IEEE working group could vote on the final standard sometime next year. Broadcom believes its chips being announced today will be compatible with the standard, as it is following a similar strategy that it pursued with 802.11ac in 2012. 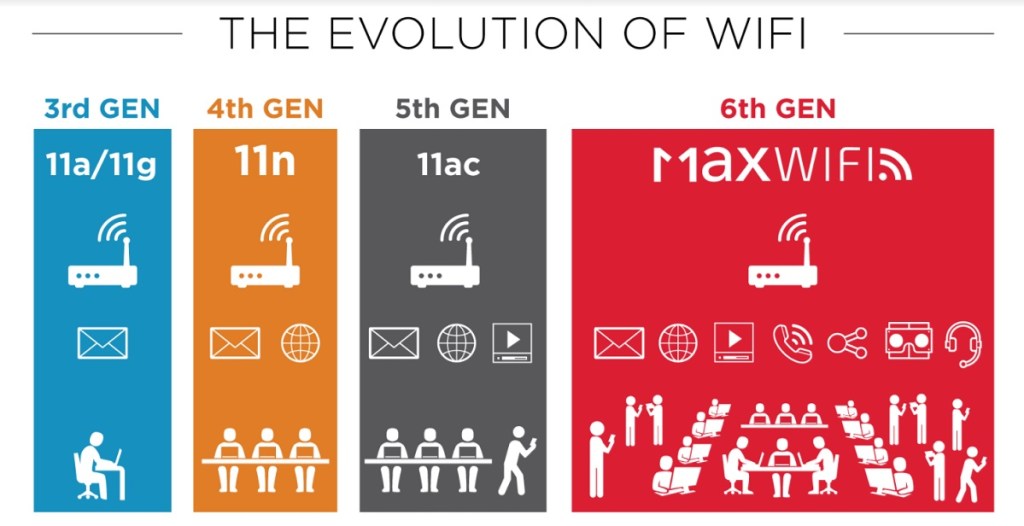 Above: Each generation of Wi-Fi has added something new.

Max WiFi is the sixth generation of Wi-Fi and the most powerful standard yet, with innovations that go beyond speed. Broadcom said Max WiFi supports delivery of simultaneous video, voice, data, and Internet of Things services to larger numbers of wireless devices. This means that steady, high-speed Wi-Fi with good service quality will be available to consumers in homes, offices, and high-traffic public venues such as stadiums.

“Our reliance on Wi-Fi has increased tremendously as we stream live experiences over social media and upload pictures and files to the cloud while also connecting the many ‘things’ around our home,” said Greg Fischer, senior vice president for Broadcom Carrier Access at Broadcom, in a statement. “Max WiFi, based on 802.11ax, is designed from the bottom up to address these evolving consumer needs. With the launch of the Max WiFi ecosystem, Broadcom has yet again pioneered the generational transition of Wi-Fi.”

Broadcom has also optimized Internet uploads, making it easy to do social media livestreaming and cloud storage. According to Extreme Networks, 11.8 terabytes of data was generated at this year’s Super Bowl by fans posting videos, updating statuses, and streaming live from the stadium.

In homes, existing Wi-Fi networks are under strain. Max WiFi uses a technology called Uplink and Downlink Orthogonal Frequency Division Multiple Access (OFDMA). This feature of 802.11ax significantly increases the efficiency and capacity. It allows several devices to communicate concurrently in parts of the frequency spectrum that are allocated in proportion to their needs. It also does more sophisticated scheduling of downlink and uplink service quality.

Andrew Zignani, senior analyst at ABI Research, said that the 802.11ax protocol is significant for users because it is backward-compatible with older Wi-Fi devices and helps networks deal with a wireless traffic explosion.