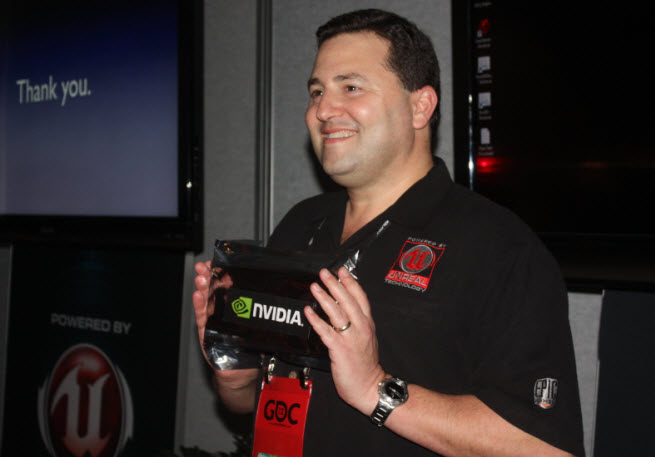 Epic Games did a demo today of Unreal Engine 3 running in the Adobe Flash environment. That means games with good 3D graphics will be able to run in web browsers and inside sites such as Facebook without requiring a user to download the game first.

And that could begin an interesting test. Will the hundreds of millions of users who have embraced simple, two-dimensional games from social game makers such as Zynga also embrace games with great 3D imagery? To run on Facebook or in browsers, Unreal Engine 3 games have to be paired with Adobe’s Flash 11.2 version, which is shipping in the near future. Flash 11.2 is able to tap graphics hardware in a computer, rather than running simply on the PC’s microprocessor.

“Yes, these could have been Facebook games,” said Mark Rein, Epic vice president, in an interview with VentureBeat. “For us, this is important because everybody is in our wheelhouse now.”

The demo used a pre-release version of Flash 11.2.  It runs on every browser, including Firefox, Safari, and Internet Explorer. Unreal competes against rival 3D technologies such as Unity Technologies, which has also focused on running on downloadable PC games as well as social and mobile games.

“It works for games of all sizes, small, medium, or large,” Rein said. “This is the year when we reach every platform.”

The newest platform to run the Unreal technology is the Sony PlayStation Vita. Rein showed a version of Mortal Kombat using that environment.

Rein also showed last year’s Samaritan demo, which is Epic’s vision of next-generation 3D graphics in a game. Last year, it took a PC with three Nvidia GTX 580 graphics cards running with a huge power supply and a total hardware cost of about $2,000. This year, the same demo can run on a single Nvidia Kepler graphics card. Nvidia is expected to launch the Kepler technology in the near future.