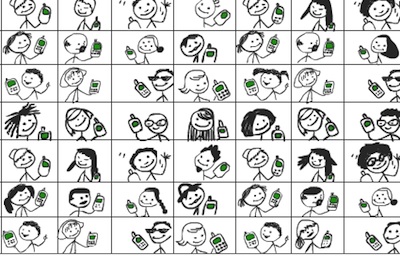 The service, launched in February by the Sequoia Capital-backed Bubble Motion, has soared to 2 million overall users in just a few months, quadrupling their first-month launch of 500,000 in March. Paid subscribers have been on a atmospheric rise, as well – the service had just 200,000 paid subscribers in April.

The company now plans to roll out parallel launches in Japan, Indonesia and the Phillippines.

“Growth to date has exceeded our wildest expectations,” said Tom Clayton, president and CEO of Bubble Motion. “At this point, it really has started to take a life of its own. Moreover, we believe that we’re only seeing the tip of the iceberg here, as our traction to date has come from only a fraction of the addressable market.”

In essence, Bubbly — BubbleBlog to users in India -– is a phone service that allows users to record voice blogs, which are then shared with their “followers,” who dial a special code to listen to messages. It has caught on with Bollywood celebrities, who record messages for legions of fans. While listening to messages from fans and family is free, subscribing to a celebrity blog costs 10 to 30 rupees, or $0.21 to $0.65 a month to get notifications when there’s a new message.

“With so many mobile social networks looking for scale and revenue, Bubble Motion is proving that a new model exists for such services and can make money even in emerging markets,” said spokesman Kevin Jordan.

Part of Bubbly’s success has been fueled by the sign-on from Bollywood stars like Amitabh Bachan, whose Bubbly followers outstrip his Twitter audience, with 270,000 followers on Twitter and 350,000 on Bubbly.

The company partnered with service providers Bharti Airtel and Reliance Communications to deploy the technology, which is available in all of India’s 23 telecom circles. As Bubbly catches on, content rises, with comedians and politicians signing on to record voice blogs, which in turn pushes subscription rates.

“Bubbly is being promoted differently in different circles, and what we’re seeing is that where we have regional and local stars voice-blogging, our adoption skyrockets,” Clayton said.

The technology behind the service has had to be retooled to handle the higher-than-expected volume, Clayton said -– with the initial goal of allowing a maximum of 100,000 followers to a blog (meaning the power to notify 100,000 subscribers instantly when a new voice message is available).

“Now, as our users have blown through those follower numbers — within the second month of launch, we have now designed the system to handle over a 1 million followers each and are quickly scaling that to 10 million-plus followers each,” Clayton said.

The service is already seeing its share of copycats in the fiercely competitive and booming mobile market in India, but Clayton said he’s confident his company has a head start and strong grip on the engineering

“There is a significant network effect here, so we’re moving fast to capitalize on this momentum and roll out the largest countries as fast as possible,” Clayton said. “Right now, we’re trying not to get distracted by new entrants, but rather are focused on execution and the ultimate goal of building communities and connecting people through voice.”