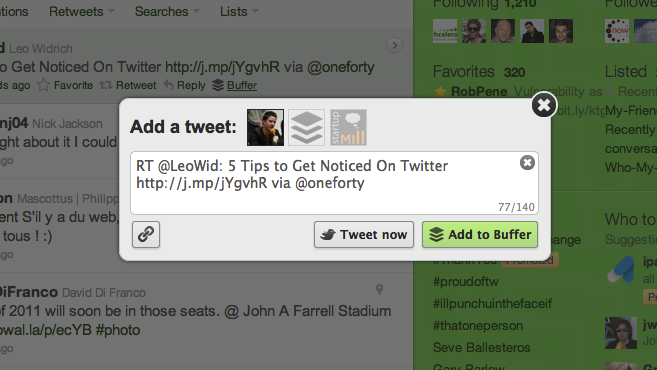 Buffer, a social network scheduling service, chooses when to send out your status updates for you and just added LinkedIn to its repertoire, along with Facebook and Twitter.

Several companies have taken on the service of scheduling tweets and Facebook updates, letting you choose which date and time an update goes out. Instead of letting you decide when to push out an update, Buffer takes the scheduling into its own hands and sends out updates at “optimal times.”

Buffer conducted a survey of 2,000 Twitter users last August and found that engagement was up 200 percent for users who scheduled tweets with Buffer, The Next Web reported. The company claims that there are optimal times to send out tweets and other status updates, times when people are more likely to see the content and click on shared links.

Hootsuite, Tweetdeck, and so many other services have popped up that let you schedule tweets and status updates for later, though all of them focus on scheduling at a specific time. Services like Hootsuite are more suited to people who want complete control over their status updates, where those who use Buffer are more willing to turn that control over to a piece of software to do it for them.

Buffer was founded in 2011 and is run by a three-man team. The company raised a seed round of $400,000 in December from 19 angel investors including Huddle co-founder Andy McLoughlin, and Thomas Korte and Gokul Rajaram from AngelPad.

Beyond funding support, the company plans to turn a profit by charging for premium services. Buffer is free for up to 10 posts per month, but you can upgrade to the Pro or Premium plans. Pro is $10 per month for several social media accounts and 50 Buffer posts, Premium is aimed at businesses, costs $100 per month, and offers unlimited Buffer services.