Mozilla just announced that it wants to make the Internet more useful by allowing users to use any service they want anywhere on the web. It’s an impressive goal, with an impressive name — Ubiquity. Basically, Mozilla’s Firefox browser was one of the first to support tabbed browsing, and now it wants to help you close those browser tabs. You won’t need them because you’ll be able to bring up maps, email, translations and whatever else on any page.

This is an idea with a lot of potential. For science fiction fans, you can even think of Ubiquity as the online equivalent of Ubik, the miracle product in Philip K. Dick’s novel of the same name, which could do anything you wanted. For example, if you’re reading a review of a restaurant that you’re interested in, you can just highlight the restaurant’s address, then with just a click bring up a Google Map of the location in a small window on the page. Even cooler, if you’re writing an email, you can insert the map into the message. 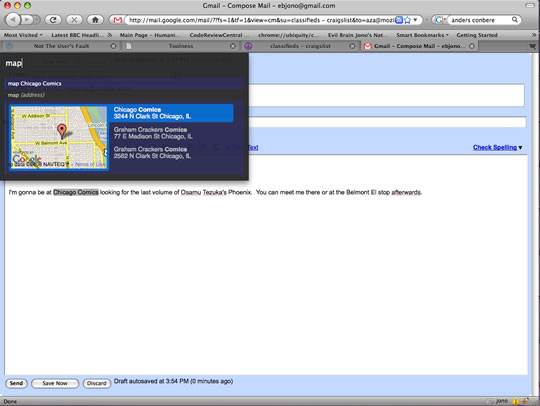 Of course, like most great ideas, it has been tackled before. In a lot of ways, Ubiquity is just a more sophisticated version of toolbars like Yahoo’s. Vysr also unveiled a similar browser plugin called Roam About, which is described in virtually identical language, i.e., promoting a “user-centric” rather than “site-centric” web.

Ubiquity is launching in an early testing version that already includes important functionality, such as searching Wikipedia and Google, posting comments to Twitter and highlighting syntax in any code that you find. You can also add new commands through a “subscription” mechanism.

The real test will be which of these tools becomes the best platform for users and developers to add the features and applications they want. Vysr has already released its application programming interfaces (APIs) to developers, but Mozilla definitely has the name recognition and credibility to take the lead.


Ubiquity for Firefox from Aza Raskin on Vimeo.