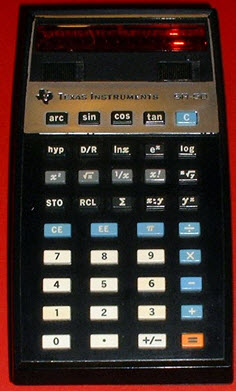 Texas Instruments is buying National Semiconductor for $6.5 billion. That brings together two of the largest and oldest companies in the semiconductor business, and it means that TI will have a huge share of the analog chip business.

These two companies aren’t household names for consumers with the exception of those who remember TI’s old calculators from the 1970s, as pictured. But their chips are the building blocks of billions of dollars worth of electronic gadgets, as they enable the translation of real-world signals such as voice into an electronic format that computers or phones can understand and manipulate.

TI chief executive Rich Templeton described the deal as being about “strength and growth.” Templeton complimented National Semiconductor for boosting profits and cutting expenses. He said the acquisition could boost TI’s profits in the future. After the deal is complete, more than half of TI’s business will be in analog chips.

Historically, Dallas-based TI and Santa Clara, Calif.-based National Semiconductor have been fierce rivals. TI was founded in 1947 to make transistors. It grew a huge defense business, a calculator business and other businesses. But it shed those to focus on digital signal processor chips and analog chips, eventually becoming a huge player in the cell phone chip business in the 1990s. National Semiconductor was started in 1959 and became one of the foundational companies of Silicon Valley. The chip industry grew up in parallel in both regions, with many companies spinning off each mother ship.

National Semiconductor also has its own chip factories in Maine, Scotland and Malaysia. TI expects to pay for the deal with a combination of cash and debt. It has $3 billion in cash and can borrow $1.9 billion in a revolving credit facility. National has $879 million in cash and $1 billion in debt. TI shares are up slightly in after-hours trading.