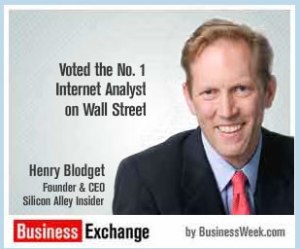 It’s an open secret that Business Insider, the blog network founded by disgraced-stock-analyst-turned-ace-reporter Henry Blodget as Silicon Alley Insider, has raised a round of funding from a number of high profile backers, including Allen & Company LLC, Marc Andreessen, Jim Friedlich of Zelnick Media, and Matt Luckett of Balestra Capital and Kohlberg Ventures.

We’d been hearing the company was trying to raise a round for a while. PaidContent.org puts the amount at an “estimated” $5 million, but we’re hearing from sources it was less than that.

Two million, five million, whatever it is, it’s pocket change to Allen & Company. Why did the firm bother with this small an investment? I called a few business reporters to dish on the company. (Unlike emails, phone calls don’t end up on Twitter.) The verdict is unanimous: Blodget’s new investors have acquired maybe 10 to 30 percent of the company. That’s enough to pay a few years’ of the low-paid writing team’s freelancer checks, or to buy up smaller blogs.

What they’re really getting is Blodget.

It’s another open secret that Henry Blodget’s “sources close to the deal” are often his business partners, specifically his own parent company’s CEO, Kevin Ryan. For a token investment, Business Insider’s new funders get to tip one of the most widely read, widely-quoted voices in the business press.

I’ve never met Blodget, but Henry and I both contributed to Slate a few years ago. The guy can tell a story, and he’s willing to admit his ignorance when it counts. What’s not to like? Influential people read him and believe him.

But there’s a downside to the new money: By raising millions, it puts more pressure on the company to perform. For his new investors to be seen as successful,  CEO Ryan will need to figure out how to sell Business Insider for far more than $10 million. Had the company not raised money, it could sell for a much lower price and everyone would still be happy. Two years ago that would’ve been a snap. Now, sources close to the deal will report that it’s not gonna happen.