Domo, which is building a dashboard for real-time business intelligence, has landed another $20 million without even trying.

“There’s probably three people a week that I turn down, who want to put money into our company,” said James, in an interview with VentureBeat. He agreed to accept IVP’s investment because the venture firm has a good track record and James has worked with it before. 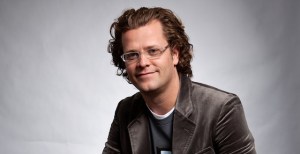 “We thought it made sense to take additional money,” James said, but added: “We’re always trying to build the company in a way that we won’t need more money.”

The company is calling this second round of investment its “Series A-1” tranche, to indicate that it has the same terms as its $33 million Series A round (but at a higher valuation). Previous investors include Benchmark Capital, Andreessen Horowitz, Ron Conway and David Lee of SV Angel, and Hummer Winblad.

Domo hopes to give executives and managers a single, customizable, sharable view of the business metrics that matter to them, delivering its product as an online service, similar to the way Salesforce.com, Omniture, Microsoft’s Office 365, and other software-as-a-service (SaaS) solutions work. It will aim at collecting a slice of the estimated $10 billion annual market for business intelligence services.

James’ previous gig was Omniture. After cofounding the web metrics company, he led it to its initial public offering in 2006 and subsequent $1.8 billion sale to Adobe in 2009. He left Omniture in July, 2010.

Domo is based in Salt Lake City, Utah, and currently employs about 100 people, mostly engineers, James said. However, once the product is ready to go, he plans to kick the sales organization into high gear.

“We will definitely be a sales-driven organization,” James said. “Right now we’re in the process of making sure the product is absolutely right, and then we’re going to sell it to every man, woman, child and retired person I can find.”