You might think that by now, VCs would use business plans from new social network companies as kindling.

But Hollywood-based Buzznet, a network devoted to allowing indie music fans to bond over the bands they love, has raised $6 million in its second round of funding from Redpoint Ventures and Anthem Venture Partners. It was valued at more than $20 million, post-investment.

The site is different than music networking sites such as Last.fm . Instead of focusing on online radio, it lets fans post boilerplate social network content like photos, videos, comments and blogs — on a bands’ actual Buzznet profile pages. In some cases, the band members respond. On MySpace, the content on a band’s page is entirely controlled by the band.

Buzznet is aware that it’s not the next MySpace or Facebook, but is taking a different approach, targeting what it calls a “passion group”–in this case indie music junkies–that will generate content itself and keep coming back for more. The company says it hooked over six million active users generating 100-150 million page views per month, a 300 percent increase since the beginning of this year. According to HitWise, in terms of percentage growth, this makes Buzznet the fastest growing social network on the web.

However, looking at the site, we don’t understand why. From the front page on, it’s chaos, with flashing banner ads on the right and shifting photographs on the left. The further down into the site you dig, the more chaotic it becomes. Profile pages are packed with inelegantly placed photos and videos, and a band’s bio is squeezed into a little scrollable text box.

We talked to Buzznet’s Chairman, Tyler Goldman, and he described the site as a “Wikipedia for music,” but with so much visual clutter on every profile page, actually gleaning anything meaningful about a band was a difficult task. Tyler said that the company expects to monetize with advertising, and they did manage to score a deal with Honda for the Honda Civic tour, but that involved creating a totally different site. The company is confident it will succeed where everyone else has failed and convince advertisers to hawk their wares amidst user-generated content. They raised this recent round to build out a top-notch ad sales team to do the job. 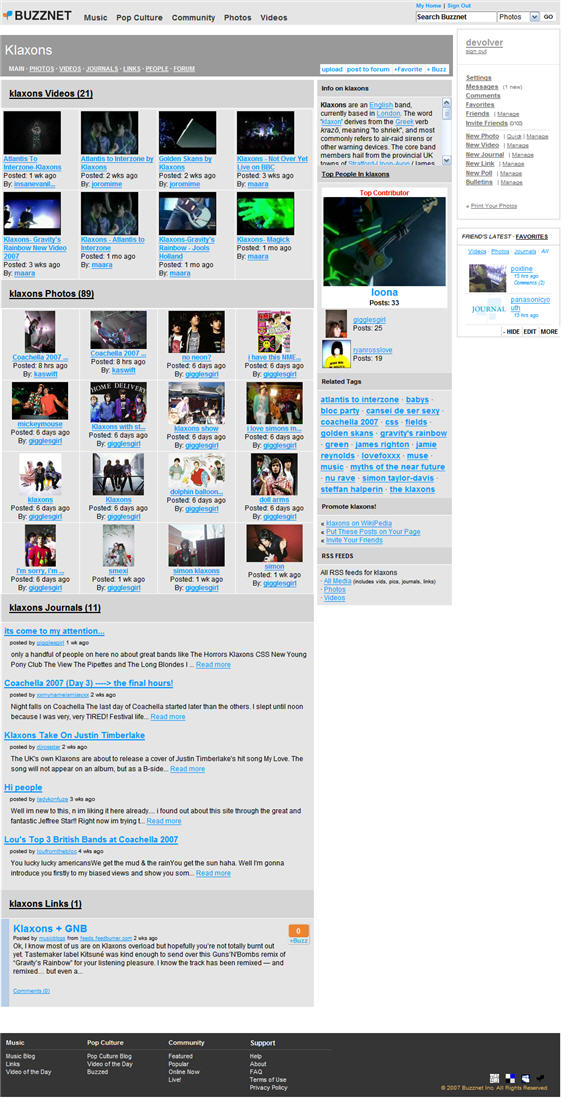