Buzzwire lets you stream video, audio, and live internet radio to your mobile phone — something other companies do.

But Buzzwire does this without requiring a download — setting it apart from the crowd.

The company, which has been in stealth mode, launches in public beta today. Mobile media, especially video, is taking off. Revenue from mobile video in Q1 2007 was $146 million, up nearly 200 percent from the same period last year, according to one industry report. More growth could come: As much as 15 percent of American cellphone subscribers have video-friendly 3G (high-speed) handsets, according to mobile analytics company M:Metrics.

Streaming media to mobile phones is not new, but Buzzwire’s main competitors, including MyWaves and MobiTV, focus exclusively on video and require downloads for the best experience. While MyWaves, which says it has just surpassed one million users, can be accessed from the mobile browser, the video-selection interface contains too much information and does not display it elegantly. Buzzwire is notable because it works within the browser alone, with a relatively clean look and feel, though it still needs work (more below).

Its technology also sets it apart — at a price. Buzzwire has built a back-end that enables wireless carriers to add streaming media, including video, podcasts and internet radio into their offerings with very little development effort on the carriers’ part. Buzzwire says that it is plug-and-play, and its team has experience working with mobile carriers here and abroad.

Buzzwire believes that working with these carriers is the only sustainable way to go and, after its beta, intends to charge a $2-$3 monthly subscription, with higher rates for those who don’t want ads. MyWaves, on the other hand, exists independent of the carriers, giving its service away for free. MobiTV charges $9.99 per month, and includes advertising.

To get started with Buzzwire, you visit its Web site and create an account. Once there, you browse through the video, audio, and internet radio content it offers and, with a click, add a channel to your subscriptions, which then appears on your Buzzwire mobile homepage. From this homepage, you can also browse through popular and featured channels, but there is no way to search through all of them and add one using your phone (Buzzwire says this capability is in the works).

The interface, while superior to MyWaves’, has some issues. For example, if the title of a channel is more than a couple of words, you can’t see its whole name, and it’s not always clear what’s what. Buzzwire’s regular website is also visually unappealing and not easy to use, and there is very little high-quality content. To be fair, this is the first iteration, and changes on both of these fronts are in the pipeline.

The big long-term threat is the iPhone, and the change it represents: After watching YouTube videos on that beautiful screen, in a real browser, it feels like applications based in normal mobile browsers are already obsolete. This is not yet the case, though, and with more than 33 million people using 3G phones, there is money to be made without the iPhone in the interim.

The Boston-based company raised $4 million from Spark Capital and Matrix Partners last fall, and is planning a second round later this year. 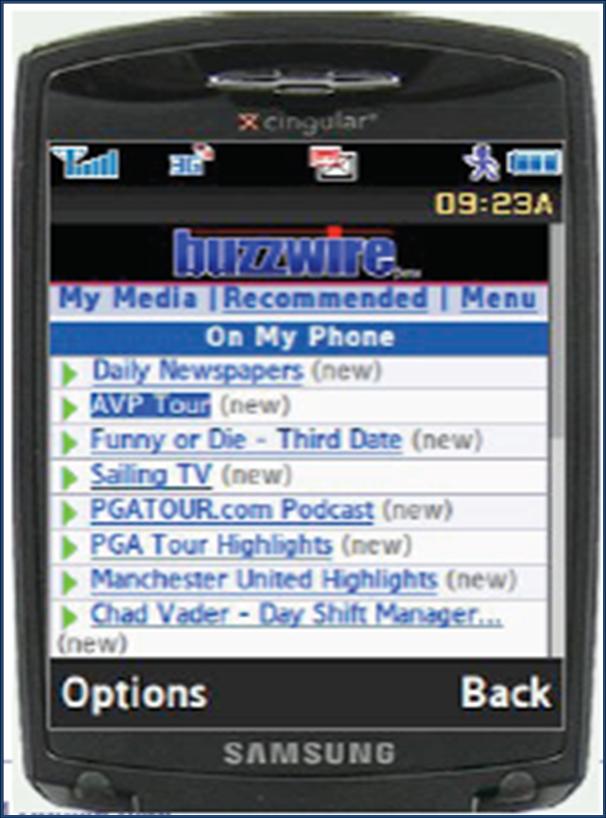