Social gaming company Zynga is taking fan feedback into account and will offer the older version of its popular poker game on mobile.

After months of live testing, the new mobile version of Zynga Poker launched in September. But a significant percentage of fans said they wanted to play the older version, which had previously been slated for retirement. Now, Zynga is bringing back the old version as Zynga Poker Classic.

The move is a critical one for Zynga’s cash cow, which has had more than 350 million players since its launch in 2007. Zynga has a huge audience for poker, and enough of these players said that they didn’t like the new version, which is significantly more realistic graphics than the old game. The new Zynga Poker is No. 26 on the top-grossing lists for all iOS games, and it is No. 8 for iOS casino games, so the new version isn’t a flop. But it isn’t that big a deal to offer two games to different sets of fans.

Players will still be able to play against their friends or move their poker chips from one version to the other. Jon Liu, the vice president of games for Zynga Poker, said in a blog post that the company is taking customer feedback to heart. The new version had a “sophisticated design” and a “feature set that inspires more competition, authenticity, and social connections between friends.”

“We value all of our player communities and want you to know that we take the introduction of new products and features very seriously. We have heard from many of you that you like the look and feel of the new Zynga Poker, while others miss the classic design and play style of the original game,” he wrote.

Zynga Poker Classic will debut again in the coming weeks on iOS and then on Android after that. Players will be able to seamlessly transfer their profile, history, and chips back.

“We want to fuel your passion for poker, no matter if you want to play the traditional Zynga Poker Classic or experience the innovative new Zynga Poker,” Liu said. “By giving you two poker games, you now have the option to choose how you play.”

While the old version had a cartoon style, Zynga’s new game has a look-and-feel that gives the players the feeling of sitting at a poker table at a Las Vegas casino. It has a faux 3D perspective, rich animations, and a clear view of the cards. The audio is also designed for a realistic casino floor sound. More than 100 billion hands of poker have been played since 2008. 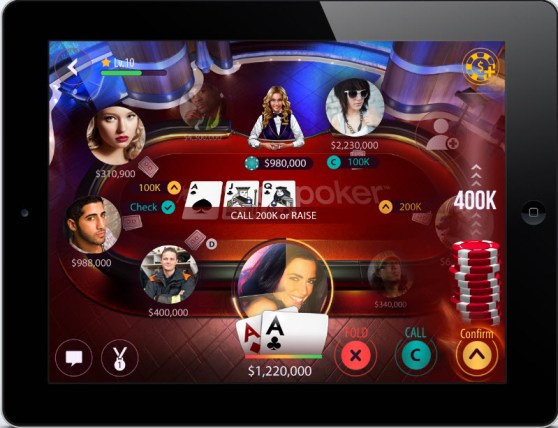