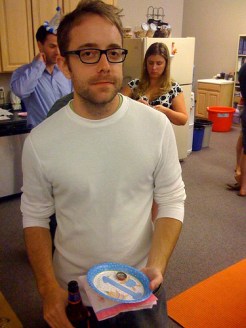 It’s with a heavy heart that I write this post. Reporter MG Siegler is leaving VentureBeat to begin work at competing blog TechCrunch. We always viewed MG as one of our better writers, and he fit really well with our team. At his best, he was provocative and sprinkled his pieces with a steady sense of humor — usually led by a killer headline — that made him a joy to read.

He managed to do this while also writing insightful — often breaking — stories about the iPhone and its explosive application platform and also about the rise of the Twitter phenomenon. At his worst, he’d write stories about iFart apps that would regularly generate more page views than any other story at the time. I’m really proud of how far MG has already come in his career. We first noticed him in 2007, rising up the ranks of writers hitting the top of Techmeme, the web site that tracks which writers are breaking technology news. We hired him early last year, and he’s continued to flourish. Of course, it hurts that he’s joining one of the most outrageously over-hyped blogging franchises out there. No, really, it’s all fair game, TechCrunch.

The VentureBeat team wishes you the best of luck, MG!

In honor of his departure, here’s a list of our favorite MG stories:

AndroidTunes? Amazon launching a mobile music/movie store for Google’s platform
The iPhone outsells that thing I’m using as a paperweight (the RAZR)
Hulu channels Michael Corleone, Boxee support also whacked
After trying it out, I have a good feeling about Hunch
The real iPhone 3G ripoff: Text messages
Chicken Little, the cloud is falling
GeoEye-1, the “Google satellite,” will capture the Obama Inauguration from space
This is the Microsoft I want to see