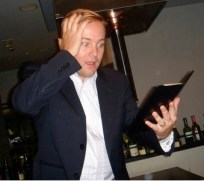 If you’ve wanted proof that we in the professional press are as crazy as a pack of Mac fanboys when it comes to reporting on Apple, here it is. Late Tuesday, the night before Steve Jobs walked on stage to unwrap the iPad, baby-faced entrepreneur Jason Calacanis, who made bank in the 90s as editor of Silicon Alley Reporter and again in the 2000’s with Engadget, began goofily tweeting that he was a beta tester for Apple’s about-to-launch tablet.

Calacanis, who has 95,000 followers, made up features at random: “Yes, there are 2cameras: one in front and one in back (or it may be one with some double lens) so you record yourself and in front of u.”

Like us, you probably missed this tale in the tidal wave of noise around Apple’s launch. But Calacanis’ faux specs were reported on by several mainstream media publications normally known for better horse-sense about technology.

Valleywag editor Ryan Tate made a “collage of shame” below with screenshots from the sites that should have known better: The New York Times, The Wall Street Journal, Wired, CNN Money, Reuters, Macworld, and Joystiq. Yes, Joystiq!

I write for the NYT, WSJ and Wired, so it’s kind of awkward to report this.  But as Tate’s screenshots make clear, the coverage Calacanis got was definitely too credulous. I’ve worked with Jason now and then, and I believe him that he wasn’t trying to pull off a big hoax. The solar panels should have been a giveaway. 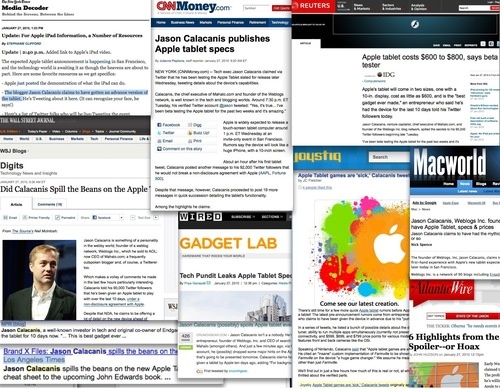