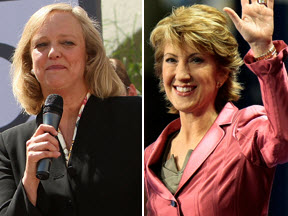 Whitman, former CEO of eBay, beat state insurance commissioner Steve Poizner for the Republican nomination for California’s next governor. She will face off against Democratic victor Jerry Brown, who is current state attorney general. Whitman, a billionaire, spent about $71 million on the race, while Poizner, who had his own riches as a pioneer in GPS technology, spent $24.7 million.

It shows that there is life after running a giant technology company. If they both win in the fall, it would be fair to say that Silicon Valley’s influence in political circles will hit a high point.

Brown already took a shot at Whitman, saying, ”It’s not enough for someone rich and restless to look in the mirror one morning and decide, ‘Hey, it’s time to be governor of California.’ ” If these women are successful, you can bet there are a lot of Silicon Valley CEOs who will consider politics as an option instead of early retirement.