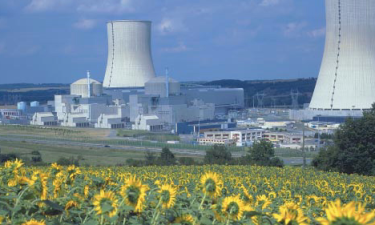 The Fresno Nuclear Energy Group and Areva have signed a letter of intent to build nuclear reactors in California’s Central Valley. Areva is proposing to build its EPR reactor somewhere in Fresno County, possibly beginning construction in 2017. If this nuclear push in the golden state is successful, it will set a strong precedent for nuclear energy in the U.S. in general, carrying the potential to dramatically change the country’s power mix.

Areva is supplying the technology for the project. Founded in 2001, Areva is a subsidiary of global research CEA, 90 percent of which is owned by the French government. Siemens, one of the major players emerging in the smart grid arena, has a 34 percent stake in Areva NP, the branch in charge of the nuclear reactor business.

Areva’s lead technology, called the Evolution Pressurized Reactor, is a powerful third-generation reactor cooled by pressurized water. A proposed EPR reactor in Maryland would produce 1,600 megawatts of power, capable of powering up to 1,600,000 homes. A similar facility could be slated for California’s Central Valley. And several other EPR reactors are in the works in the U.S., even though much of Europe has shunned the design due to safety concerns. These holdups have caused two such projects in Finland to run over deadlines and budgets.

Similar problems with time and money have been encountered in Areva’s French effort. There, one reactor’s construction prompted a letter from Finland, France and the U.K. governments alleging that the instrumentation and control systems are dangerously constructed.

With climate change becoming a hotter (pun intended) issue every day, nuclear power is becoming a more viable technology. While construction costs and timelines typically exceed proposed limits, the reactors emit very little carbon and do not depend on fossil fuels.

Nuclear power could bring California that much closer to hitting its goal of producing 33 percent of its energy from renewable sources by 2020.

Even if Areva’s control systems are improved and no construction overages occur (unlikely), there are sure to be years of government permit review before construction can begin.