Caltrain, the local commuter train service, has seen its ridership grow to a record of nearly 11 million this past fiscal year, continuing a healthy rebound from the depths of the post-Bubble era.

This is quite a turnaround. Caltrain had seen its ridership plunge to eight million in 2004, down from more than ten million near the peak in 2001.

Trains have been running along the peninsula between Silicon Valley and San Francisco since before cars or silicon chips arrived on the scene.

Like traffic on highway 101, which parallels it, Caltrain ridership may be a measurement of the economic health of the region. Companies that didn’t exist back in 2001 are now growing all along Caltrain’s route. The San Francisco end of the line ends near San Francisco’s SOMA neighborhoods, popular with design firms and smaller startups. Further south, the train goes through cities –Mountain View, Palo Alto, San Jose, etc — well-known for their companies. 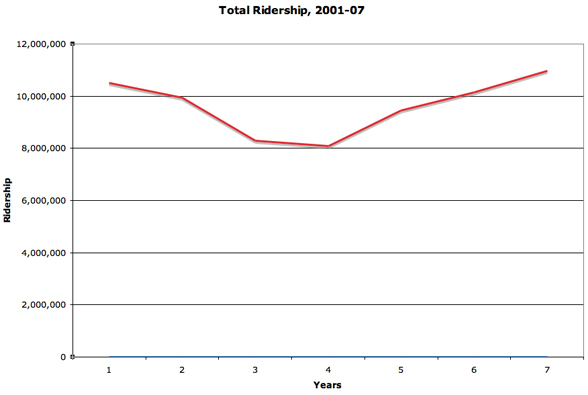 During the slow years of 2003 and 2004, Caltrain closed down its tracks on weekends as it added its Baby Bullet trains. The move pushed ridership numbers down. Today, the Baby Bullets can get you from Mountain View to San Francisco in under 45 minutes in time for meetings, reminiscent of rail transit in other countries. Electronic billboards, appearing on 101’s clogged intersections, compare live commute times with the trains.

In fact, so many bike commuters are using Caltrain during rush hour that Caltrain has started adding an additional bike-carrying car to some trains.

It’s even providing unscheduled trains to the busiest stations.

Increasing fares for riders has also meant an increasing revenues for Caltrain, especially versus 2001. Caltrain still faces a “structural deficit” that it says it is trying to overcome. 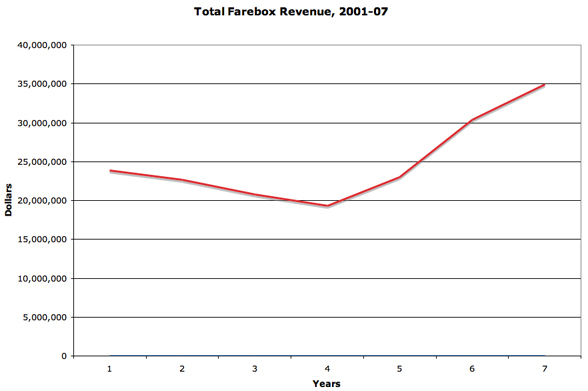 Caltrain is jointly administered by the counties of San Francisco, San Mateo and Santa Clara, and is looking for new methods of financing as it pursues a number of ambitious expansion projects.