I remember the days when Techmeme was full of great tidbits and blogs with clever writing, but it seems as if something switched. Now, in order to find the more niche content that matches my tastes, I have to mine through half a page of Microsoft/Yahoo drama and speculation about the iPhone 3G.

Blogged.com thinks it can change this and challenge Techmeme and its fellow aggregators. The difference rests on the ongoing and highly debated battle between man and machine: While Techmeme and sites like it rely on algorithms to select content; Blogged uses the human brain. Unlike the human-powered Digg, Mixx, and Propeller, all of which feature content voted to the top by the wisdom of the crowds, Blogged’s content is all curated by hand. In this way, it somewhat resembles Alltop and TopNetPix. If your goal is to consume consume masses of content or navigate a hectic interface, those two might do the trick. For those that would prefer something elegant, Blogged’s interface suggests that its designers put thought into the design.

Blogged has a staff of 10 editors who spend their days mining through a database of blogs to find individual posts to feature on the site’s main pages. While many of the usual suspects all make an appearance today, I’ve discovered quite a few quirky, entertaining tidbits that would probably never land on Techmeme or get very far on Digg (see Chip Chick’s review of a highly portable Barbecue or Akihabara’s Lazy Geek’s Cushion, for example).

I found that the featured posts were well-written and worth a read, assuming I hadn’t read them or something similar already. It is with this latter fact that some of our most plugged-in readers will take issue: those that use Twitter and, increasingly, FriendFeed to discover quality content will get it much faster there than they would on Blogged. The same is true for those that rely on Techmeme: An algorithm will always outrun a bunch of editors to the breaking news and always amass relevant content faster and Techmeme’s page will always change more over the the course of a day.

Digg’s new recommendation engine, which VentureBeat’s MG Siegler found to be “good to quite good,” will also pose a serious challenge to Blogged: It’s probable that a machine that automatically matches niche content to my interests will do a better job than a handful of humans, no matter how selective they are.

But active Tweeters, FriendFeeders and Diggers are not Blogged’s target audience, anyway: The founders say their goal is to highlight quality blogs for the mainstream, a population that will be more tolerant of a post that is a few days old as long as what shows up is good. How to get to the mainstream without getting through the tech elite first is a question the founders will have to answer.

Blogged is based in Souther California and is privately funded. 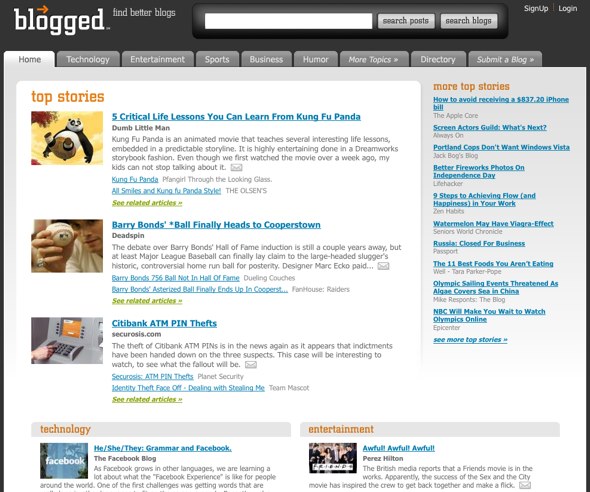