Lessig outlines his goals in an article written for the Huffington Post: the refusal of contributions from Political Action Committees or lobbyists, abolition of legislative “earmarks”, support for public campaign financing and transparency in the functioning of Congress.

“From the scandals involving outright bribery, to the indirect corruption of earmarks, to the pervasive and persistent skepticism born of the view that too rarely does congressional action track policy sense rather than campaign dollars, [Congress] is an institution in desperate need of change,” Lessig writes.

Lessig also notes that there are 67 open seats in this year’s congressional election, so there’s more potential for electoral change now than there’s been in more than a decade.

It’s hard to believe any one website can inspire dramatic political reform, but Lessig and Trippi’s backgrounds inspire some faith. Trippi has advised a number of Democratic candidates — most famously Howard Dean’s presidential run in 2004, which illustrated both the power and the limitations of an Internet-centric campaign. Lessig spent years advocating for more flexible intellectual property laws, but he recently switched his focus to corruption, particularly the effect of money on politics.

Last month, Lessig even considered a congressional run himself, before deciding that he didn’t have a shot at winning. (I interviewed Lessig as he was mulling the possibility. When we talked about MAPLight, a political reform website whose board he’d just joined, he already seemed excited about taking “the Wikipedia instinct, which is to take small manageable work that progresses the public good” and applying it to the problem of corruption.)

So with all this big talk, what will the Change Congress website actually do? Right now, candidates and voters can pledge their support for any or all of Lessig and Trippi’s four goals, and they can embed that pledge onto their websites. There’s also a map of the country’s congressional districts, colored to indicate how much PAC money each representative has accepted. (See screenshot below, which shows information for California’s 14th district, which includes the heart of Silicon Valley.) 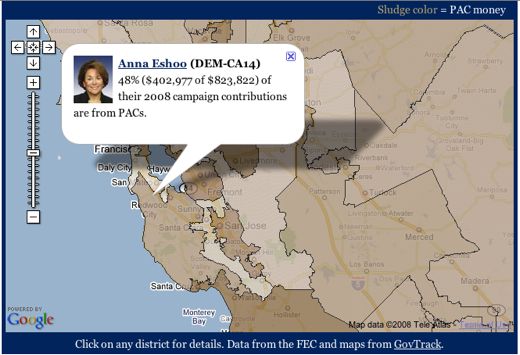 But I’m more excited about the features Lessig promises to unveil shortly. Starting in April, users will be able to edit the map to show which candidates have accepted the pledge, which candidates seem to support the Change Congress movement’s general goals and, among the other candidates, how much PAC and lobbyist money they’re accepting. The site will then follow the Emily’s List model and try to drum up contributions for pro-reform candidates of either party.

Individually, none of these features is particularly innovative, but packaged together with Lessig and Trippi’s name recognition, Change Congress could make a bigger impact than similar sites. It will be interesting to see whether online calls for change can translate to political reform in the real world.