Boomlagoon, a Finnish game studio that the creators of Angry Birds started, wants to show that it can still make some magical and wildly popular game characters that millions of mobile players can enjoy. So the Helsinki-based game studio is unveiling more details of Monsu, a game with adorable monster characters.

If Monsu has even a small measure of success enjoyed by Angry Birds, which more than 2 billion people downloaded, the game would be a big hit. But it may be difficult indeed to duplicate the sensation of the birds-versus-pigs physic game created by Rovio, where Boomlagoon’s founders worked. Players have seen many such games in the past few years, and no one can predict which will prove the most popular.

But you have to figure that a team that has a fighting chance has to be one that has these characteristics: It’s leaders created Angry Birds; they have a new small studio in the same city that birthed Angry Birds; they’re using a similar art style; and they’re in a country that has come to dominate the mobile gaming business.

The company’s first mobile game, Noble Nutlings, has had a good start. But the team has higher expectations for Monsu, said Boomlagoon CEO Antti Stén in an interview with GamesBeat. It stars a little green monster with the same name, and it’s a hybrid of a multi-environment side-scrolling platform game and a collectible card title. The game and its characters have a rich backstory.

“We believe this one has better interactivity,” said Stén. 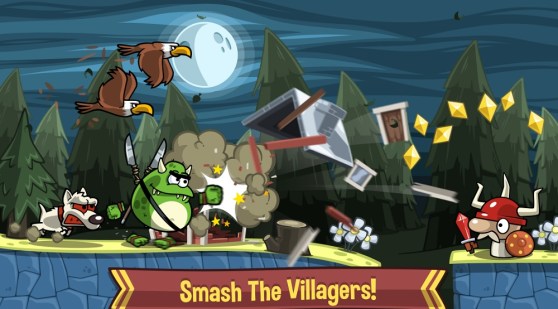 The game is about Monsu, who hoards treasure in a castle. Nasty little humans come steal his riches, and Monsu responds to their theft. You can collect cards and get access to more monsters who serve as Monsu’s companions. They work together to fight off the waves of grumpy human villagers. You can grind away to earn those cards or purchase them with real money. The fun is in destroying the villagers and villages, said chief marketing officer Olli Laesvirta in an interview with GamesBeat.

Part of the fun is collecting all of the different monsters. They have varying characteristics (like eagles who fly), and they can get you through different parts of the game. You can only have three companions at any given time, so you must choose them wisely. It’s social because you can engage in tournaments or complete missions alongside friends. The stages include woods, cave, cemetery, castle, and village.

The strength of the game is one reason the company was able to raise money, Stén said. Boomlagoon recently raised $3.6 million from European investors Northzone, Inventure, and 360 Capital Partners. They join existing funders that include angel investor Jari Ovaskainen and London Venture Partners, who also participated in this round.

Boomlagoon’s founders include three Rovio team members. Boomlagoon now has eight employees, and it’s close to announcing its next game.

Stén said his studio learned from Angry Birds the importance of creating fun characters, but the team has also learned some things that Rovio didn’t teach them, like how to build free-to-play games from the beginning.

Stén was the former lead server architect for the original Angry Birds, and Tuomas Erikoinen was the lead artist. The team hopes the casual cartoon characters they created will appeal to both men and women.

Monsu debuts later this summer on iOS, with no official launch date as of yet. It’s had several rounds of playtesting. More of those will be coming up before the final release. The game sessions run anywhere from 30 seconds to 5 minutes. Tournaments take place a few times a week.

“We have learned a lot about the free-to-play market,” said Stén. “We took characters with attitude from our earlier experience, and we made them stronger. The unique personalities of the characters come out stronger. And the art has more depth than our previous efforts.” 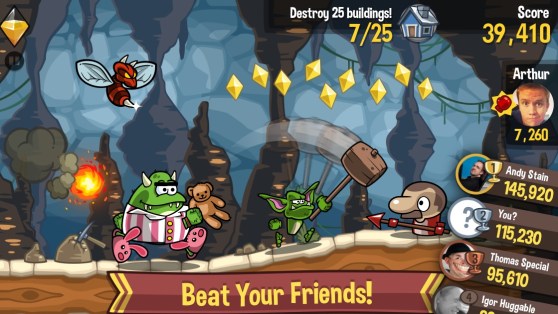