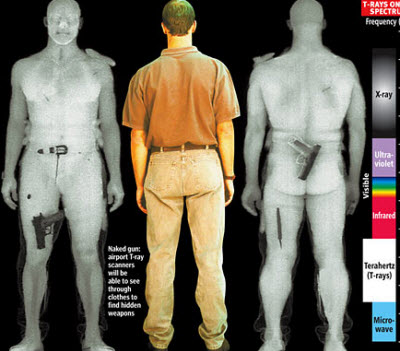 Would-be traveler John Tyner has become a cause célèbre on the internet because he refused to subject himself to what he considered to be invasive body searching at the San Diego airport on Saturday. He had heard about the full-body scanners that the Transportation Safety Administration had installed that can give airport screeners an extremely detailed X-ray image of a traveler’s body.

The TSA’s alternative for those who refuse the scans is an “enhanced pat-down” search. That would have involved the screener touching Tyner’s genitals with a hand.

But Tyner refused that kind of search too and, using his cell phone’s video camera, documented the conversation that followed with a male screener. The resulting confrontation wound up on the internet and went viral today and was covered by almost every broadcast outlet. Google news shows 654 news stories on the subject of the video recording now.

A protest movement has rallied behind Tyner on the web. One group has declared Nov. 24, the day before Thanksgiving and the busiest travel day of the year, to be National Opt-Out Day. The group has also created a Twitter account where users are discussing whether the imagers detect sanitary napkins. Another group has created the site We Won’t Fly, where the slogan is “Act now. Travel with dignity.”

Before the Tyner incident, the airline pilots union had also expressed concern about the full-body scans exposing airline workers to excessive radiation. Also, pilot Michael Roberts also objected back in October to the policy, saying, “No groping me and no naked photos” in his own post. Several researchers at the University of California at San Francisco have warned of the radiation risks. And the Israelis also don’t use the full-body scanning because they can’t capture explosives hidden in a body cavity.

Others have posted their “sexual assault” experiences as well. With the big Thanksgiving travel holiday approaching, the TSA could have a real problem on its hands if travelers follow through with their plans for civil disobedience on the busiest travel day of the year.

“If you touch my junk, I’ll have you arrested,” Tyner said on part one of the video recording (embedded below), which Tyner posted on YouTube and blogged about on his site, Johnny Edge. After Tyner said that, the male screener asked for a supervisor, saying, “I have an issue.” A female supervisor came out and said they would have to do a pat-down.

“I don’t understand how a sexual assault can be made a condition of my flying,” Tyner said.

“This is not a sexual assault,” she said.

“It would be if you weren’t the government,” he replied.

The supervisor said that he didn’t have to fly that day. Things went downhill. Tyner didn’t fly. And he wound up posting the videos below along with a long post about the incident. The TSA has not offered comment on the incident. But the full-body scans were implemented after an attempted bombing by Umar Farouk Abdulmutallab, the so-called underwear bomber, after he tried to hide explosives in his underwear. Some 385 scanning units are in use at 68 airports.

It’s not clear how many people truly sympathize with Tyner’s cause. A USA Today/Gallup poll released last week said that 78 percent of air travelers approve of full-body scanners in airports and 84 percent believe the scanners would prevent explosives from being carried on a plane. Some 98 percent of passengers say they would rather have a full-body scan than a pat-down search.

“We ask the American people to play an important part of our layered defense,” Homeland Security Secretary Janet Napolitano wrote in Monday’s USA Today. “We ask for cooperation, patience and a commitment to vigilance in the face of a determined enemy.”

The first video below has been viewed more than 353,000 times on YouTube, and Tyner’s post has more than 5,000 comments. Among them: “TSA: Party like it’s 1984,” a reference to George Orwell’s novel on totalitarianism. [photo credit: Jaunted]