TokBox, a browser-based video chat service allowing either live or recorded messages, is set to take the world by storm, according to today’s New York Times.

Housed by famed venture firm Sequoia Capital in an old YouTube office, the company also announced today that it had accepted a $4 million funding round from Sequoia, alongside investors including Amidzad and execs from Netscape and Paypal — a slightly larger amount than YouTube’s first funding. The company earlier raised a $100,000 angel round from a wider group, which also included the alumni of YouTube (co-founder Jawed Karim), Bebo.com, Slide and Cisco Systems. Rajeev Motwani, a Stanford professor and an early adviser to Google, is also an investor.

The obvious implication is that TokBox will be heir to YouTube’s good fortune (Sequoia’s Roelof Botha is leading the TokBox investment, just as he did on YouTube). The simple fact that video is involved doesn’t mean that the two companies are similar, though.

The popularity of online video followed from a market created by movies. The internet’s progress from text, to sound and finally to video mirrored similar institutions from previous years: Newspapers, radio and television.

However, video communication is a new idea that has yet to catch on with the masses — despite its hype among the digerati here in Silicon Valley. Businesses have used some form of video chat for years, but free startups like DimDim (our coverage) and pay services like WebEx already thoroughly cater to the videoconferencing market.

A more apt comparison is the video chat offered by Skype or AIM. Though the Times argues that the free TokBox, by making itself available in a web browser, is a far more attractive offering than those two services, the requirement for a webcam still makes it more complex.

Despite the inclusion of video recorders into new Apple computers, most consumers still don’t have their own webcam. And as long as that remains the same, recording and sending videos will remain a much smaller market than watching them.

Until that time, slow adoption rates of webcams and video chat services are likely to continue. The obvious conclusion: Although TokBox is probably an excellent investment for Sequoia, it won’t become a YouTube anytime soon. 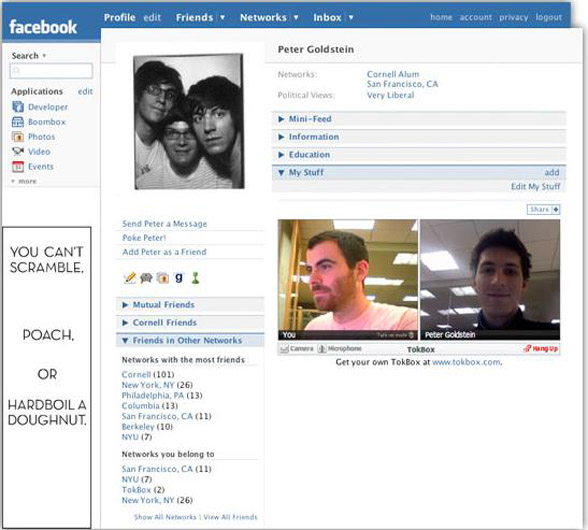