The figures from Canalys come in a seven-day period when the “big three” cloud providers revealed their quarterly earnings, with Amazon’s AWS, Microsoft’s Azure, and Alphabet’s Google Cloud reporting record sales, though growth slowed in some cases.

While cloud services infrastructure was already a major growth industry, the pandemic has accelerated this upward trend over the past year, with each quarter recording sharp inclines. The last three-month period once again represented the “largest quarterly expansion in dollar terms,” according to Canalys, driven by remote work and consumer services such as online gaming and music streaming.

Looking at the full calendar year, Canalys’ figures show that cloud spending hit $142 billion, up one-third from $107 billion the year before.

This growth has hugely benefited companies that operate on the cloud, including virtual video conferencing and remote collaboration tools like Zoom that have been on a tear.

Amazon’s AWS continues to lead the field, with revenues hitting $12.7 billion in Q4, up 28% on the corresponding period a year earlier. Compared to its 34% growth in Q4 2019, things aren’t moving as quickly as they once did, but analyst Patrick Moorhead says Amazon still “had a great quarter,” even if its growth is stalling.

“It’s important to note that it grew more in one quarter, $2.78 billion, larger than the entire annual revenue of many cloud plays,” Moorhead said. “AWS is well on its way to creating an annualized, $50 billion revenue company. This makes AWS larger than Salesforce.com and SAP combined. Equally impressive is that AWS delivered over half of the company’s operating profit.” 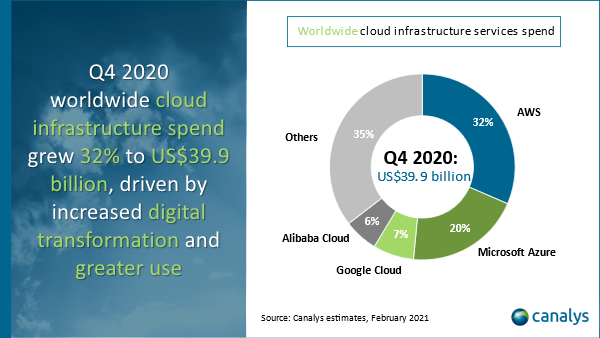 AWS now commands 32% of total cloud infrastructure spend, compared to 20% for Microsoft Azure, 7% for Google Cloud, and 6% for Alibaba.