Companies spent a record $31 billion on cloud infrastructure services in Q1 2020, though the full impact of COVID-19 is unlikely to be realized until the second quarter.

New figures from Canalys indicate cloud spending grew 34.5% year-on-year (YoY) from the $23.1 billion for the corresponding period last year. However, the cloud spending increase was an established trend, with Q1 2019 figures revealing a 39.3% YoY increase and Q4 2019 showing a 37.2% YoY increase. These numbers also show that while the overall dollar spend continues to rise, the rate of growth is slowing.

The numbers indicate that cloud spending only grew 2.6% quarter-on-quarter through the end of March 2020, or around $800 million in real terms. 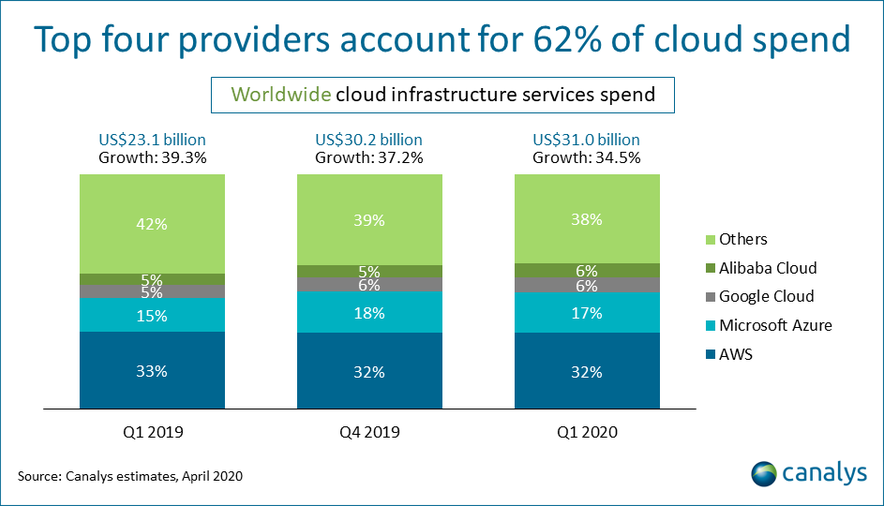 Moreover, while Canalys attributes the growth in cloud infrastructure services spend to the sudden shift to remote working as COVID-19 hit, much of the global workforce didn’t begin working from home until March. That said, China — the second biggest cloud services market after the U.S. — embraced remote working earlier as it was first to feel the effects of the pandemic.

It’s no secret that consumers and businesses have been flocking to cloud-based services and remote working tools. Netflix doubled its expected signups for new customers for the last quarter, while Microsoft announced that it grew its daily active user base for Teams by 70% to 75 million. Videoconferencing platform Zoom, meanwhile, saw its user base jump from 10 million in December to more than 200 million in March, and Google Meet passed 100 million daily active users — with 3 million new users joining daily.

But while cloud usage has certainly been up, service providers have experienced a downside — large enterprise projects such as SAP migrations, hybrid cloud deployments, and “other transformational projects” have been put on the back burner. This conservative approach to new spending may counter some of the growth seen elsewhere in the cloud services realm. Indeed, some of the industries hit worst by the global pandemic — such as hospitality, tourism, and construction — have cut or delayed planned cloud spending.

“We saw an unprecedented surge in demand and use of cloud-based applications primarily driven by remote working — not just collaboration tools, but also cloud security, which was also added to by increased ecommerce and other online activity,” Canalys chief analyst Matthew Ball told VentureBeat. “On the reverse, we saw an immediate slowdown of large enterprise consultative-led projects.”

Elsewhere, Microsoft reported a 59% YoY revenue increase for Azure in the last quarter, compared to 62% for the preceding quarter and 73% for the corresponding period last year. And while Google only recently started breaking out its Cloud figures, we know its revenues in Q1 2020 were up 52% YoY to $2.78 billion, compared to the 53% YoY rise it reported in Q4 2019.

It’s difficult to read too much into the impact COVID-19 has had on the cloud services and infrastructure market so far — data for the next quarter should be much more revealing.

What is clear, however, is that cloud services will likely only grow in demand if remote working continues in the future. All the major providers were already investing heavily in their cloud infrastructure, with Amazon recently opening its first African datacenters, in addition to a new region in Italy, while Google added a new region in Las Vegas. Alibaba, meanwhile, revealed plans to invest $28 billion in cloud infrastructure over the next three years after a surge in uptake of its various services during the COVID-19 outbreak led to service issues.