Smartphone sales are experiencing a slowdown globally, and China isn’t immune — quite the opposite. In a report published by Canalys today, analysts estimate that shipments in the country last year fell to their lowest level since 2013 — 396 million units — and that fourth-quarter sales alone dropped 15 percent year-on-year. It’s the seventh consecutive quarter of decline, and comes after a 4 percent overall decline in 2017.

The report — which blames a number of factors, chief among them consumers opting not to upgrade their smartphones and a decline in middle-class purchasing power — mirrors findings from China Academy of Information and Communications Technology (CAICT), a research institute under the country’s Ministry of Industry and Information Technology. In January, CAICT said that shipments dipped 15.5 percent to roughly 390 million units for the year, and even more steeply in December. 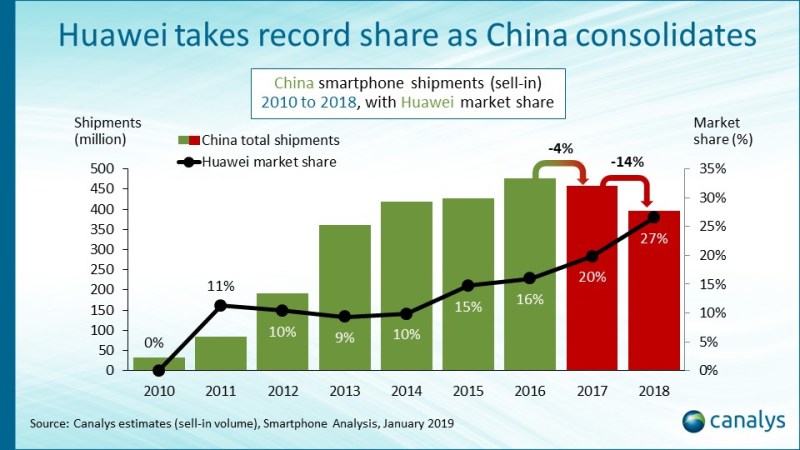 Above: Huawei and Vivo were the big winners in 2018 when it comes to smartphone shipments, according to Canalys.

A few winners emerged from the most recent slump, however: Huawei and Vivo. Both saw their shipments climb 16 percent and 9 percent, respectively, while Oppo notched a narrow 2 percent dip.

Others were less lucky. Xiaomi ranked fourth in terms of overall shipments — it got 6 percent fewer smartphones out the door than last year — and Apple remained stuck in fifth place with a 13 percent decline year-over-year. 2018 marked the Cupertino company’s third consecutive year of shipment decline in China, in fact, as it faces challenges on a number of fronts there, including weak demand for the iPhone 7 and iPhone 8.

“As [Apple]s services division becomes more important in China, it is vital for [the company] to maintain or grow its installed base of iOS users,” analyst Mo Jia said. “Apple must reexamine its China strategy, and find a way to revive its high-end brand image, in order to align with the purchasing behavior of local middle-class and upper-class demographics.” 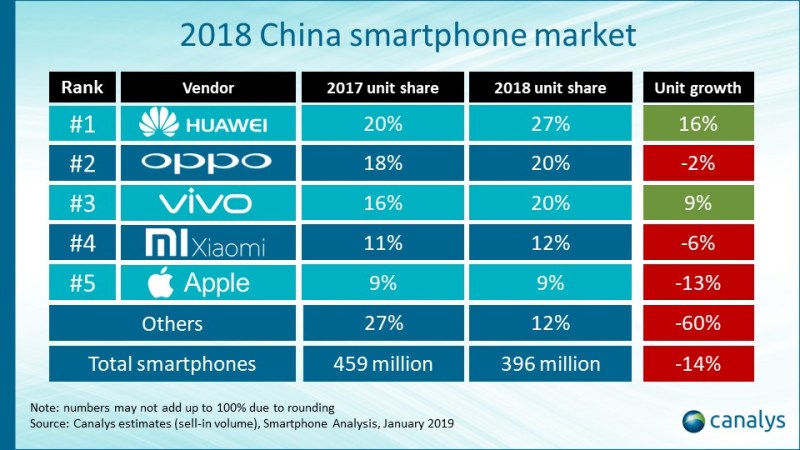 Above: Apple’s growth in China stagnated in 2018.

But more rough waters lie ahead. Canalys forecasts that this year, the Chinese smartphone market will fall by 3 percent to 385 million units as the average selling price of smartphones exceeds $400, and as manufacturers prepare to release 5G devices. If that prediction comes to pass, it’ll be only the second time smartphone shipments have dipped below 400 million since 2014.

“Competition in the upper midrange and high-end segments will intensify,” Canalys wrote in its report, “and vendors must focus on bringing the latest technology to consumers to justify higher price points.”

It’s not all doom and gloom where the Asian smartphone market is concerned, though. In contrast to China, the Indian market saw extraordinary growth, with research firm Counterpoint reporting last week that 145.2 million smartphone units shipped in 2018 — a 10 percent year-over-year growth over the 132 million units that shipped in 2017.