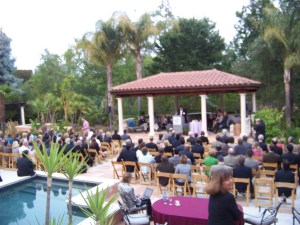 Once a year venture capitalist Heidi Roizen and her husband Dave Mohler open up their Woodside villa to host the SD Forum’s Visionary Awards honoring pioneers of Silicon Valley. Each time I attend, I’m mesmerized by the estate and its furnishings, from the Moroccan guest house with its old rifle collection to the Tuscan villa architecture with its zany mix of animal head trophies.

Upon walking up the long driveway into the foyer of the mansion, I was greeted by Ann Winblad of Hummer Winblad and met with some of the night’s honorees: tech writer Steven Levy (who just moved from Newsweek to Wired), Qualcomm founder Irwin Jacobs, Netflix founder Reed Hastings, New Enterprise Associates general partner Forest Baskett, and Diane Greene, founder of VMware. They were the latest to join the Visionary list for the group, which promotes tech entrepreneurship in the valley and has given out the awards for 11 years now.

This was one of those events where the who’s who of Silicon Valley shows up, though gray hair was fashionable since the list included a lot of past visionaries. San Jose Mayor Chuck Reed told the crowd they were welcome to set up their innovative companies, particularly cleantech firms, in his town.

Baskett, former chief technology officer at the once-high-flying graphics supercomputer company Silicon Graphics and an ex-Stanford professor who played a big role in getting MIPS Computer Systems and Sun Microsystems off the ground, said he was as enthused as ever about tech in the valley. Cleantech is his latest investing obsession.

He noted that one of his big missed opportunities was failing to invest in the virtualization company being started by ex-SGI engineer Greene; he felt it would be a conflict since SGI might do the same thing. Too bad, since he missed out on billions of dollars in returns, the payoff for VMware’s initial public offering.

“You can imagine my regrets,” he said.

Mendel Rosenblum, chief scientist of VMware, introduced Greene as proof that you can start a multibillion-dollar company without being a jerk. Hastings of Netflix, which disrupted Blockbuster with its mail-order DVD business, took the opportunity up on the stage with Roman columns to offer advice to entrepreneurs. 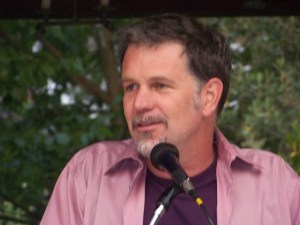 “Success is all about employee freedom,” he said. “You have to fight the encroachment of rules and bureaucracy and people who want to limit us at every place. The fundamental risk in a technology company is the loss of creativity. That is a massive tidal wave that ruins companies. You have to take a lot of little risks, break the rules, and push the values of employee freedom.”

As an example, he cited how an employee challenged him on why he said that and still had something as crushingly formal as a vacation policy. He took six months with his accountants and lawyers to conclude that they could do away with it, allowing employees to take whatever vacation days they wanted as long as they got their work done and found someone to cover for them while they were off.

“We don’t have a clothing policy and no one shows up to work naked,” he said. “You don’t need a policy for everything.”

Taking a light tone, he rattled off three movies everyone should see: “Just Another Love Story,” “American Teen,” and “Phoebe in Wonderland.”

Jacobs, who changed the cell phone industry with Qualcomm’s code-division-multiple-access (CDMA) technology (which made big digital cell phone networks possible), chose to talk about philanthropic activities. He said one program he was excited about was teaching algebra using cell phones, where students could text message or send videos of problems to their friends to solve problems.

Levy, the longtime journalist and author of multiple tech books, reminisced about interviewing Steve Jobs early on at a pizza place and interviewing Bill Gates in Seattle. He noted how Gates, who is retiring Friday, once threw a pencil at Levy during an argument over the definition of the word “antitrust.”

The spread was impressive. The crowd was casually dressed but emanated power. I walked downstairs in the Moroccan guest house to check out the exercise gym and rock band stage. And I had to tear off a piece of toilet paper, upon which was printed an amusing non-disclosure and non-disparagement agreement. 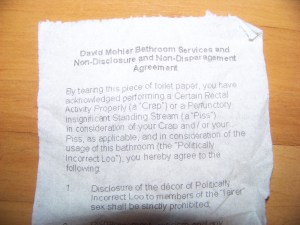