Nathan Vella, president and cofounder of Capy Games, has become a voice for the indies. As a publisher of indie titles, he spoke about the increasing difficulties that indie game studios are having in the app stores and on the web and what they can do about it.

Addressing the Gaming Insiders event in San Francisco last week, Vella said that game developers often focus on a single platform as a favorite target for a game. But he said that it makes a lot more sense for indies to go cross-platform. Porting games is cheap, and it can pay off in a big way with an even spread of revenue across a lot of platforms, he said.

“Shovel Knight broke the impression that indies don’t sell so well on Nintendo, and Broken Age has a surprisingly huge following on Mac,” he said. “All of these games are generating significant amounts of net revenue from a whole bunch of different platforms. If you were to remove a single platform, these developers would be leaving a significant chunk of money behind.”

He added, “All of these games defied the belief there is a right platform or a wrong platform. Porting is really inexpensive, and you don’t have to do it all at once.” 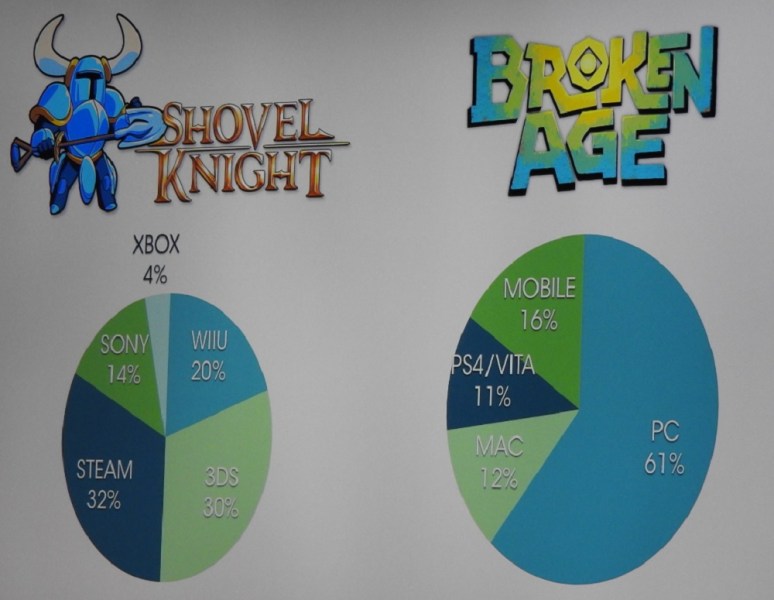 Above: The percentage spread for two indie games on various platforms, by revenue.

Vella also addressed the notion that famous YouTubers such as Pewdiepie can deliver a big audience for a game. Based on his own research, Vella found something different when it comes to the results of Let’s Play promotional videos.

“For every time I found a great piece online about how a Pewdiepie generated X hundreds of thousands of dollars, there was another developer saying that they actually didn’t have a sales spike,” Vella said.

He did find that it was important to do research on a YouTuber, such as the core audience of the YouTuber, as to whether there was a chance to generate direct sales. Capy Games had one of its games, Super Time Force Ultra, featured by YouTuber Total Biscuit. Not a single extra sale resulted, he said.

“What it means is that it isn’t a universal truth,” he said. “Being covered by the biggest multi-million subscriber YouTube stars will not necessarily generate more revenue.”

But Steam Greenlight, which gives exposure to early-production indie games in front of Steam’s users, did work well. 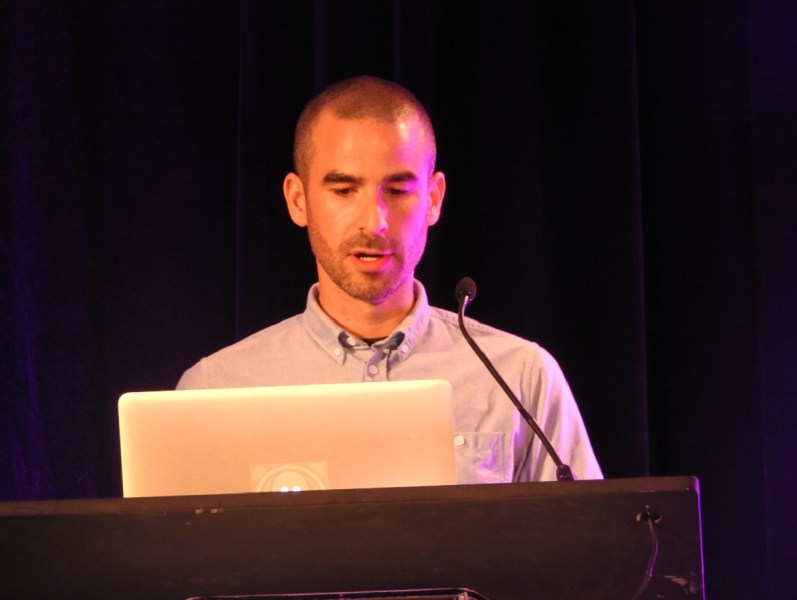 Vella also looked into whether indie games are being devalued through bundle sales and specials on platforms such as Humble Bundle and Steam.

“Our work is being sold for less than it’s worth, and people aren’t paying what they should be paying for our games,” Vella said. “It’s an argument that I’m a little bit uncomfortable with because it does put some blame on the consumer for something that I don’t think they really should be blamed for.”

“That’s a massive increase over the last generation,” he said. “Prices have gone up drastically, but users are totally willing to pay it.”

He noticed that in the last five Humble Bundles, the average age of the game was 442 days old.

With Steam, Vella had another view. The average sale price of games on Steam is going down. The percentage of games being launched per year is going up, particularly in sub-$10 games, according to data from Steam Spy. In 2014, 55 percent of Steam games under $10 sold less than 20,000 copies. This year, 90 percent of games under $10 sold less than 20,000 copies.

“This calls into question the impact of devaluation. If your game is being sold for $2.99, and you can’t sell 20,000 copies of it, does that mean that independent games have a value that is lower to consumers? I don’t think so,” Vella said.

He noted that NPD data shows that 50 percent of players wait for a sale before buying a game. The good thing is you can reach players that you would never have reached were it not for a promotion, he said.

As for mobile games, he said that his own research with developers showed that making mobile games is hard for indies.

“Sometimes the opinions we hear on the Internet might actually be right,” he said.