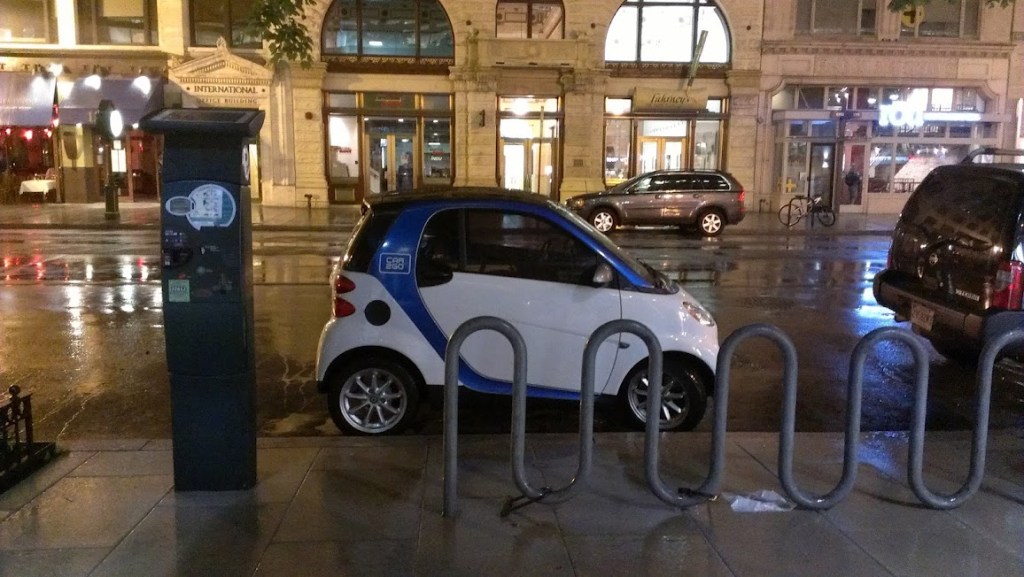 It’s incredibly rare that I run across a technology that could improve economic efficiency, better the environment, and improve quality of life for many. Car2Go hits that trifecta.

For urban areas, individual ownership of cars is wasteful. Most cars sit around all day, delivering no economic value to their owners. Surface parking is full of cars that don’t move. Streets are clogged with people circling neighborhoods while searching for parking. This is bad for the environment and bad for the quality of life of drivers, pedestrians, and residents.

A micro-sharing model like Car2Go could fundamentally change that. You would only pay for what you use. Cars wouldn’t be sitting around for most of every day, fewer cars would be parked on streets, and fewer cars would be circling looking for parking.

Car2Go is a new spin on the car sharing model popularized by Zipcar. It has a few important differences:

– You can pick up and drop off a car nearly anywhere in a city; there are no fixed locations.

–  You don’t need to pre-plan or make a reservation.

– You can use a car for one-way rentals. Need to get from the subway station to the office? Take a car at the train station and then park it at the office and tag out.

– There are no late fees for holding a car too long.

Car2Go makes use of the Smart for two micro car. I tried Car2Go last week while I was in D.C. (The company provided a car for review purposes.)  In the U.S, Car2Go is available in D.C., Portland, Austin and San Diego.

A typical rental is 8 to 10 miles and takes less than 30 minutes, according to Katie Stafford, a spokeswoman for Car2G0.

The process is simple: Open up an app and find a nearby car. Tap the RFID card against the reader and the car unlocks. The keys are in a dedicated slot on the dashboard. (The car was smart enough to know that I still had the keys in my pocket when I tried to end my rental.)

One of the the most frustrating aspects of city driving is the  most magical element of Car2Go: parking. The company did a deal with the city to allow parking at many meters and in residential zoned areas for free. Just park the car and walk away. The cars aren’t subject to meter time limits. If it’s a 2 hour meter, you can leave it all day. I was staying at a hotel a couple of blocks from the White House and I always found a parking spot within two blocks. (The hotel’s valet charges $50 a day.) I drove the car to a Washington Nationals game and parked — for free — a block away from the stadium in a neighborhood zone. The car’s tiny footprint opens up some spaces that couldn’t fit the typical car. (Car2Go paid DC $578,000 for the right to parking carte blanche, a fact dug up by Discovery’s Rob Pegoraro.)

In a shocking departure from previous industry practice, where GM executives killed the all-electric EV1, this innovation is brought to us by another car company: Daimler. (Daimler also manufactures the Smart cars.)

“You have these really densely populated urban areas that are just continuing to grow, so you need to think about the way people are going to get around and still have a great quality of life, have less congestion and have less emissions,” Stafford said. “Daimler is thinking about those things. Cities are thinking about those things. How are cities going to solve those three things? … Car2Go is one of the ways that you can do that.”

The environment is definitely on the mind of the system’s designers. My car had an EcoScore app that showed how efficient my driving was. As I drove, trees grew and squirrels and birds appeared when I was doing the right things. The trees died as I braked hard or gunned the engine. Stafford suggested that high scores might eventually result in free driving credits.

The most glaring weakness wasn’t the car or the business model. It was a navigation system that is more useless than the one in my 2005 Acura. You can’t search by a business name or category; you have to put in an address. There are no visual indicators for the next street you have to turn on. The audio cues are played at a lower volume than the radio, making them nearly inaudible. I ended up resorting to Google Maps on my cell phone.

Car2Go isn’t for everyone or every use case. Zipcar has a wide range of vehicles, allowing users to rent a convertible for a trip to wine country and an SUV for a trip to the Home Depot. You certainly won’t be hauling much in the Smart. The ride is best described as spartan. You feel every pothole and manhole cover. I certainly wouldn’t want to take Car2Go for a long trip.

Technology offers a number of ways to deliver a personalized experience with Car2Go in the future. It would be great if, as soon as you tap into the car, the radio station presets change to your tastes, your frequent destinations are loaded in the navigation system, and your phone’s Bluetooth pairing settings are also loaded. Making these elements seamless would introduce some of the benefits of individual car ownership into a more economically efficient model.

A model like Car2Go’s is highly dependent on density. For me to be comfortable letting go of a car, I have to be confident that I’ll be able to get another one when I’m ready to make the return trip. In my time in DC, I saw three other Car2Go vehicles on the street. (The company says there are currently 200 cars in DC.) I also checked the mobile app periodically and didn’t see many cars within a short walk. Although it’s too soon to have reliable statistics on DC, Stafford says that in Austin, she is typically within a 5 minute walk of a car.

If a city were to dedicate one parking spot on each block to car-sharing services like Car2Go, it would fundamentally transform urban transportation.

Perhaps the biggest weakness in Car2Go is that it’s not available in San Francisco. I would sell my car tomorrow if it were.