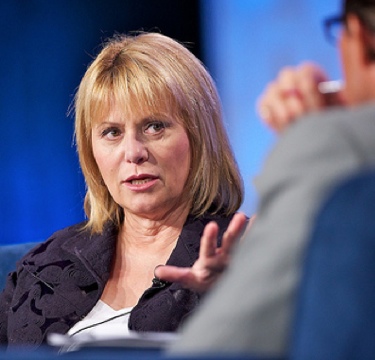 Barely 24 hours after getting fired from her position as CEO via a phone call from Yahoo’s chairman of the board, Carol Bartz tells Fortune, “These people fucked me over.”

It’s sad that in her first interview since the firing, she’s undermining Yahoo — putting her own raw emotions over the company she was previously entrusted to lead.

Read the Fortune interview. She unloads everything and doesn’t hold back. It’s very telling. This is truly Bartz’s personality. She regularly comes unglued, and this is not the first time she’s told someone to “fuck off” in public.

Even before her call to Fortune last night, it was easy to start questioning the wisdom of her bluntness: She had emailed Yahoo’s 13,400 employees to tell them she’d been fired over the phone — and did so immediately after Yahoo Chairman Roy Bostock called her.

Market analysts have been furiously debating the wisdom of that first action by Bartz, because it contradicts the traditional candor in corporate America. (There’s a great piece in the New York Times about this today.)

So, is this public display by Bartz a dose of refreshing honesty, and thus therapeutic for everyone concerned? No. It’s  a misguided lack of restraint that hurts herself and her former company.

As CEO, Bartz was charged with caring for shareholders’ interests, but in the interview with Forbes she does the exact opposite by calling the board “doofuses.” It’s worth noting that even as she calls the board names and attacks their decision, she provides no real evidence of how they actually screwed her over.

Keep in mind that Bartz agreed to take the top job at Yahoo two and a half years ago with the intention of restoring order to the position — and she did so after meeting the board. In the time since then, she wasn’t able to improve Yahoo’s performance. The company’s stock hasn’t gone anywhere. Yahoo’s market share has declined in the areas it’s most active in. A realistic person would understand that as CEO of a major company, your performance is inevitably going to come under scrutiny.

In fact, given Bartz’s past behavior, her termination should have come to a head much sooner. Bartz has bungled many times, never clearly defining the company’s vision in crucial situations.

Bartz’s performance rating among employees was in the tank, too — far lower than other executives of big companies in the valley.

Again, whether you like Bartz’s personal candor or not, she’s not been very clear on why she’s been “fucked over.” That lack of articulation is the real problem. Emotion is fine if it’s backed up. But Bartz’s emotion is not.

Later in the interview with Forbes, Bartz says she doesn’t want employees to think she abandoned them. Yet, by attacking the board needlessly, she’s actually making it harder for the very same employees she shows concern for. She’s hurting the brand, and when you do that it hurts the employees.

It’s sad to see Bartz self-destruct like this. The valley needs more strong female leaders, and Bartz once enjoyed widespread respect for what she’d accomplished in her long career before Yahoo. In the past, she arguably set a positive example for female executives in this industry. It makes her recent behavior all the more tragic, because it’s tarnished her once admirable character.