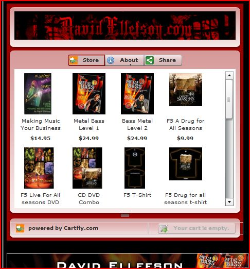 Widgets, the embeddable chunks of code on web pages that can feature anything from videos to RSS feeds, have proven to be a great way to reach lots of users. But how do they make money?

Advertising in a widget is an obvious way to try. Another is by using the widget as a sort of store window — to sell directly through it.

Cartfly (see screenshot) is the latest to push the envelope on ways to do this. It joins a large group of other start-ups in the sector, including Shopit, BlinkCart, Flogd and Nimbit, as well as larger companies offering widgets such as Amazon and Paypal.

Cartfly is trying to make it easier than ever for people to manage their Cartfly widgets directly from within their social networking page accounts, using Adobe Flex.

Arizona-based Cartfly, like its competitors, lets you create a widget on its site, include information about items that you’d like to sell, then add the widget on your social networking profile or web site. But it also allows components of its service to be built directly within larger companies — not just as stand-alone widgets. The Adobe Flex framework lets Cartfly integrate its user widget administration section directly within social network Perfspot‘s user interface, for example. Cartfly still manges aspects of the widget transaction on its own servers, however. More on the deal here.

Cartfly keeps three percent of revenue from sales and so has around 4000 “stores” — widgets — with users making an average of $40 dollars per store, cofounder Joshua Manley tells me. The average age of the user is between 18 and 35.

The company plans to roll out a Facebook application in the next few weeks, then look at integrating with Open Social.

(Separately, a note about Gigya, another widget company that focuses on more on advertising. It launched a service yesterday which lets content publishers, such as bloggers or Myspace users, easily install a widget that only features ads on their own web sites, then keep some of the revenue generated by the ad. Larger widget companies — such Slide, RockYou, Clearspring — offer various forms of advertising.)