A team of University of Southern California video game students has created Cats Your Vote, a free-to-play social mobile game that aims to increase voter awareness of the 2020 U.S. election.

The game is a “massively single player game” that encourages collective action, and it explores short-sighted vs. far-sighted decision making, living with the results, and voter regret. It’s about what’s at stake if you don’t participate in democracy. And yes, it’s about cats. It’s one of 50 student games that’s part of USC’s Games Expo 2020 virtual event on Tuesday.

Francesca “Frenchie” Palamara, a USC interactive media & games student and one of the game’s creators, said she got started on the project while searching for a team to work on a social activism game. She got an introduction to Peter Brinson, who was working on a voting game. That game was an Indiecade voting booth in the form of an arcade-like cabinet. You could play a game and then decide how to vote on whether it should have a certain kind of powerup or not. Every 15 minutes, it would tally votes. And changes would show up in the game based on how the tally turned out.

“What we learned from the experience was the effectiveness of real-time frustration and delight in changing the game,” Palamara said. “We got really interested in the real-time consequences of democracy and how could that be represented in a mobile game. By playing a mobile game with cats you can get a similar empathy.”

Because the presidential election is coming up in November, Palamara and the team wanted to get young voters excited about voting by showing them the consequences of participation.

“We know everyone has phones and we want to reach the widest possible audience that way,” Palamara said. 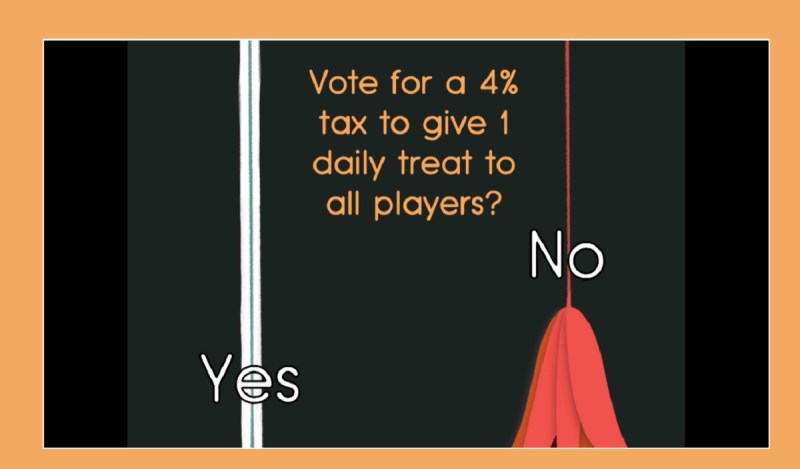 Above: Cats Your Vote gives you a flavor for democracy’s ups and downs.

The title has a bunch of minigames and a voting mechanic where a whole community of players can vote on what can happen. They can take a short-term view or a long-term view, and they all have to live with how the vote turns out.

“What I really enjoy about it is that there’s a lot of frustration and delight that users feel in the game,” Palamara said. “We decided to make a game about cats because we were taking something familiar and humorous and adding a layer of emotional feedback. That feedback resembles voter frustration and apathy. We were interested in taking something that was universally familiar and adding a layer of emotional feedback with voter frustration.”

The team hopes to release an alpha version of Cats Your Vote in late May and launch in late August. The game has 50 levels already, but the team still has a lot of testing to do, Palamara said. The idea is to get players to come back on a daily basis.

Cats Your Vote analogizes the relationship between an individual’s ambitions and a community’s shared well-being in a way that today’s young game-player can relate to. It does not aim to make a moral argument for virtual civic duty but instead provides participants the same kind of emotional experiences of ownership, connection, insight, and influence that motivate people to vote in elections.

“This is something we all did in our free time because of our passion for it,” Palamara said.

Eight people are credited for the game, but about 10 worked on it, including Mike Fischer, adjust professor of interactive media & games at USC. Beside Palamara and Brinson, the team included Hesiquio Mendez Alejo, Quiana Dang, Rudi Vanzin, Sean Bloom, and Jesse Vigil.