It’s a virtual sports game that reminds me of the disc-throwing scene in the film Tron. It’s just one more sign of how CCP is all-in when it comes to virtual reality. I talked about the game with CEO Hilmar Veigar Pétursson in an interview at the Game Developers Conference this week in San Francisco. The Reykjavik, Iceland-based CCP has 359 employees, and its team in Atlanta made Sparc.

Meanwhile, the Eve Online science fiction universe is going strong in its 14th year, with more than 500,000 players and a new free-to-play business model for new recruits. That franchise has been extended into virtual reality with Eve Valkyrie (a space-combat sim), but with the sports game, Veigar Pétursson felt it was time to expand to a new intellectual property.

Sparc will debut in 2017 for the Oculus Rift, HTC Vive, and PlayStation VR. You will throw projectiles at your opponent and dodge incoming attacks by moving around in VR. Players will be able to join 1-on-1 matches with friends online or find opponents via matchmaking. It’s just the latest in the company’s obsession for the new medium of VR. 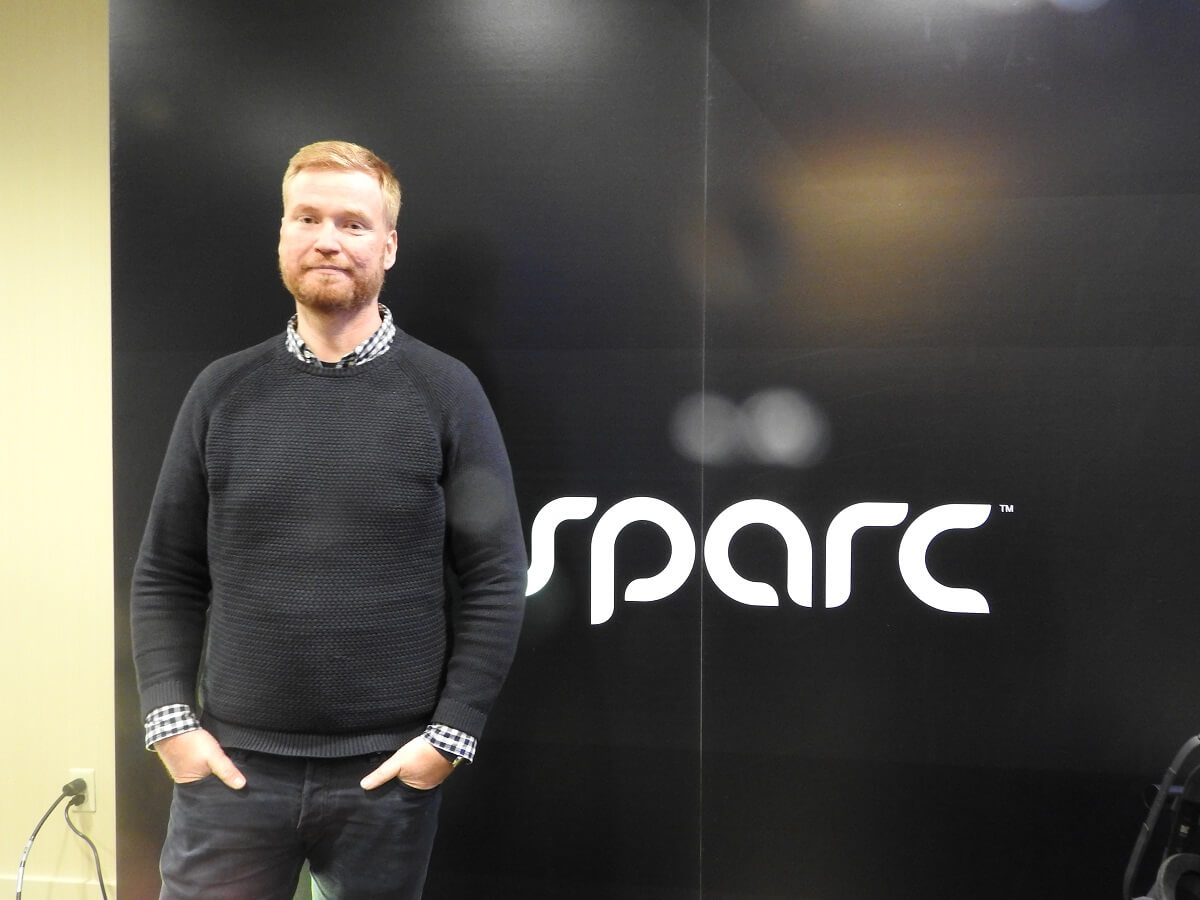 GB: You have a new game coming, a disc-throwing game?

Hilmar Veigar Pétursson: Right. It’s a virtual sport, is how we refer to it. Currently it’s discs and shields. Maybe later we’ll add other elements, but that’s how it works now. We’re curious about this intersection of virtual and physical, moving around.

Pétursson: It’s inspired by a lot of experimentation we did with the team in Atlanta. First we started dabbling with Microsoft Kinect, using your hands and body to move. They made a whole host of experiments – throwing fireballs, playing instruments, throwing discs around. Later on the tracking controllers started to emerge. We were starting in 2013, before any of that had arrived. Then we saw, “Okay, we have a viable platform.”

That changed the experience a bit, though. Once you have equipment in your hands, it feels different. You want to make it more about the controllers and the triggers. This current incarnation is built around the feel of the controllers. It became about volleys and using the shield, different aspects of that. It’s more equipment-focused. It’s been a long journey of trying things and seeing what works. Then we added this IP on top, which is not really—it’s like a sport. Sports aren’t really an IP. They just are. It’s been a very organic process.

GB: It seems like the tech has gotten a lot more accurate over time.

Pétursson: The tracking is really good. There are always nuances to what you do, and the guys spend a lot of time making sure they’re playing to the strengths of the equipment.

GB: Is this for both Oculus and HTC?

Pétursson: Right. The idea is to launch across all platforms. That’s what we did with Valkyrie. Given then installed bases, it’s not good to subdivide a multiplayer game. Going across everything and allowing for cross play is the high-level plan.

GB: Is that easy to do, the cross-platform multiplayer?

Pétursson: It’s probably not easy, but our teams make it look easy, I think. [laughs] It’s possible, how about that? It’s not impossible. We did it in Valkyrie, obviously. We’ve gotten past the nuances of the different hardware. We know them pretty well by now. We know all the rules and preferences of all the platforms. We have a lot of organizational knowledge about these VR ecosystems built in. It’s a competitive advantage now. Leveraging that is definitely something we try to bring to our games. It’s important now in the early days of VR. You have to bring everyone along to get to critical mass.

GB: Was this funded by any particular partner? What’s the timing on it?

Pétursson: This one we’ve mostly done on our own. It’ll be this year for sure. Q3, plus-minus a bit? That’s the slot we’re thinking about. A lot of it is parsing together all the platforms and the windows and so on. We haven’t nailed down a month yet, but we’re aiming for Q3.

GB: Is there a good reason to do it outside the EVE universe?

Pétursson: We’ve talked about that a lot. It felt more like—it’s futuristic, but it’s not science fiction, really. Of course the EVE universe is massive and almost anything can exist in it. We could have presented this as the Galactic Speedball Championships or whatever. We had ideas like that. But it didn’t feel right. This felt more “futuristic modern” than science fiction.

GB: How big a game is it, as far as different places to go, different arenas?

Pétursson: Right now it’s pretty basic. We’re trying to stick to the point. Obviously we’ll learn a lot from how people adapt to it, just like we’ve done with EVE and with Valkyrie. Valkyrie has had a lot of updates and tweaks and tuning based on the player base, the culture that’s emerged. We’re trying to do enough on that front without doing too much. You get so much valuable information, just seeing what happens after launch. We have a good, viable product set where we haven’t overengineered all the content based on our own imagination. We’ll see what emerges from this first entry. 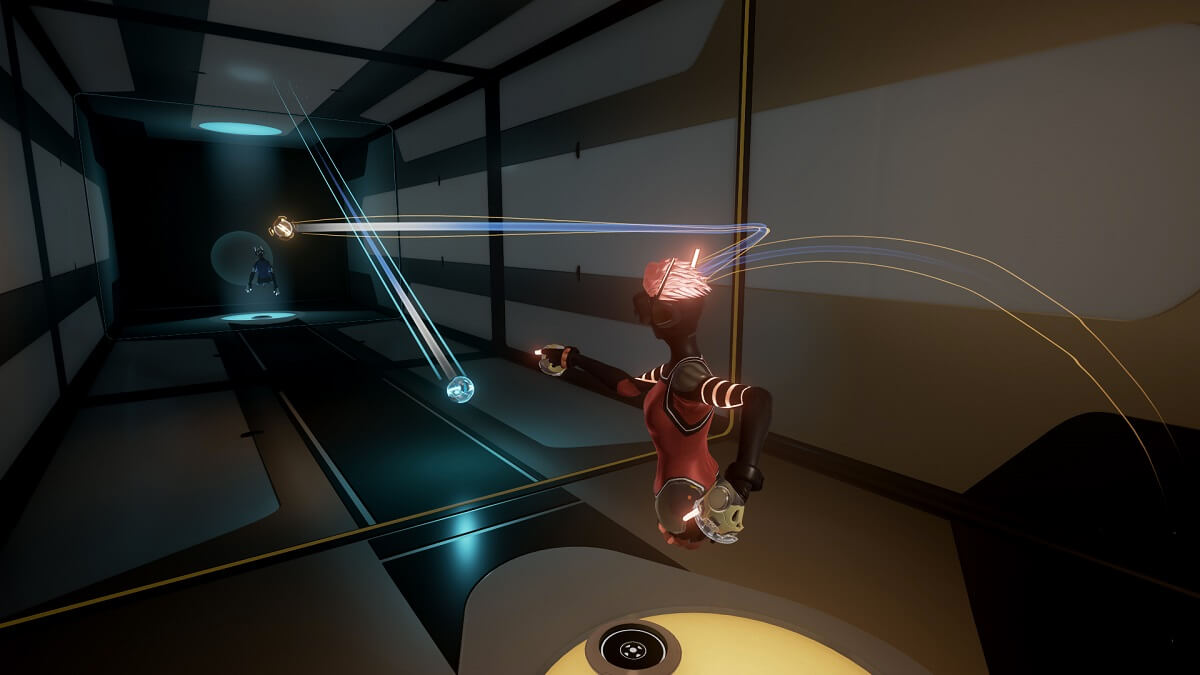 Above: Sparc is a sports game that isn’t set in the Eve universe.

GB: Is this your third generation of VR games?

Pétursson: Yeah, you could call it that. There’s no next-gen. “Third gen”! There’s a lot of learning in there. We’ve done a lot of work in VR and the knowledge and experience accumulate. We hope to bring that to all of our future products. You see the transformation from Gunjack to Gunjack 2, Valkyrie at launch to Valkyrie today, and now we have Sparc. Hopefully that creates another stream that informs future games. It’s all one happy family of mad scientists trying to figure out the impossible.

We’ve also announced record results on the financial front – record revenues and profit for last year, which we’re very happy about. We made $85 million on the top line.

GB: What helped accomplish that?

Pétursson: The backbone of that success is obviously EVE Online’s transformation last year. There were three prongs to that. You had guild trading at the beginning of the year. There were citadels, creating massive new things to build. Then you had open access in November. These massive changes the EVE team has done really jump-started growth. We were able to double daily active users by going to open access.

We also did several VR releases in 2016 – Valkyrie across three platforms, Gunjack across three platforms, and then Gunjack 2 on Google Daydream. Gunjack had record sales, half a million units sold, which I can claim is a world record until someone corrects me. Valkyrie’s done phenomenally well. All of this came together to create record results.

GB: How many people do you guys have right now?

GB: What do you think of some of the movement forward on the platform side? HTC had some announcements today, the new Vive Tracker. You can put that on props like a baseball bat or whatever. Do you think you might use that if it takes off?

Pétursson: There’s a lot of exploration, innovation, trying out things that we still have left to do. We’re mainly focused on cross-platform development, working with what’s common across the platforms. Obviously from Rift to Vive to PSVR there’s a certain set of commonalities, which we’re aiming Valkyrie and Sparc toward.

On the mobile side there’s some convergence of coding there. We have a new controller coming from Gear VR, similar to the Daydream controller. That’s another convergence. Then you have these experimental outliers like the Vive Tracker, or the force feedback glove from Valve. You have force feedback bodysuits and eye tracking and God knows what. The Vive Tracker should make mixed reality stuff even easier. You put one of those on a camera and now you can track a camera in the world. We put a Vive controller on the camera, which is a lot clunkier.

Right now we’ve set the platforms for Sparc, so we’re just go-go-go toward release. But once we’re done with that—of course, we pay attention to what’s going on. Maybe we’ll use this. Right now there’s a lot to play with as far as just things that are common to the platforms.

GB: Do you expect a second generation of VR systems and headsets to come in at some point, like wireless headsets or stand-alone hardware?

Pétursson: Obviously there will be a new generation. I’d hope people focused more on price rather than jumping to a second generation too soon. The price needs to come down. It’s very expensive right now, and that’s holding back the market. Right now some of the experiences are fantastic. It might be too soon to go to a next generation too quickly. I hope we have a step where we focus on gaining efficiencies.

If the next generation is too different from the current one, you start to potentially lose content. You need to make all new games for all new feature sets. I would personally, if I were setting the hardware agenda – which I obviously don’t – see if there’s more to do on the pricing front. 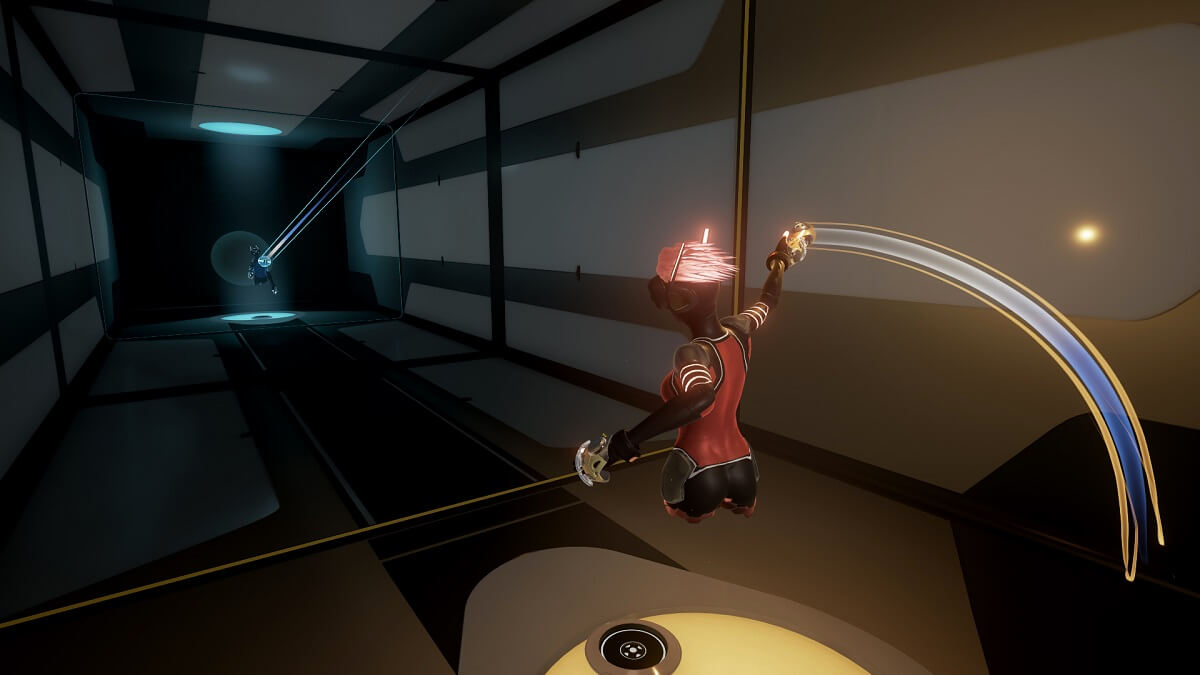 Above: Sparc is a virtual sport in VR.

GB: It looks like HTC is putting a big effort into arcades.

Pétursson: That’s another way to manage the pricing. People can go and try VR without making a serious investment of their own money. I hope arcades take off and people are excited to play there. Sparc would be a great arcade experience.

GB: Are you guys interested in the Switch at all?

Pétursson: I’m curious about it. I haven’t been able to fully figure out what they’re doing. They claim to have VR support. They filed for a trademark a while back about slotting it into a headset. The controllers are tracked, although they only have three degrees, not six. If it’s definitely VR, we’ll take a look. Right now we have our hands full with EVE Online, VR, and other PC games going on behind the scenes. We’ll see if Switch becomes another VR platform. Then it would make sense. 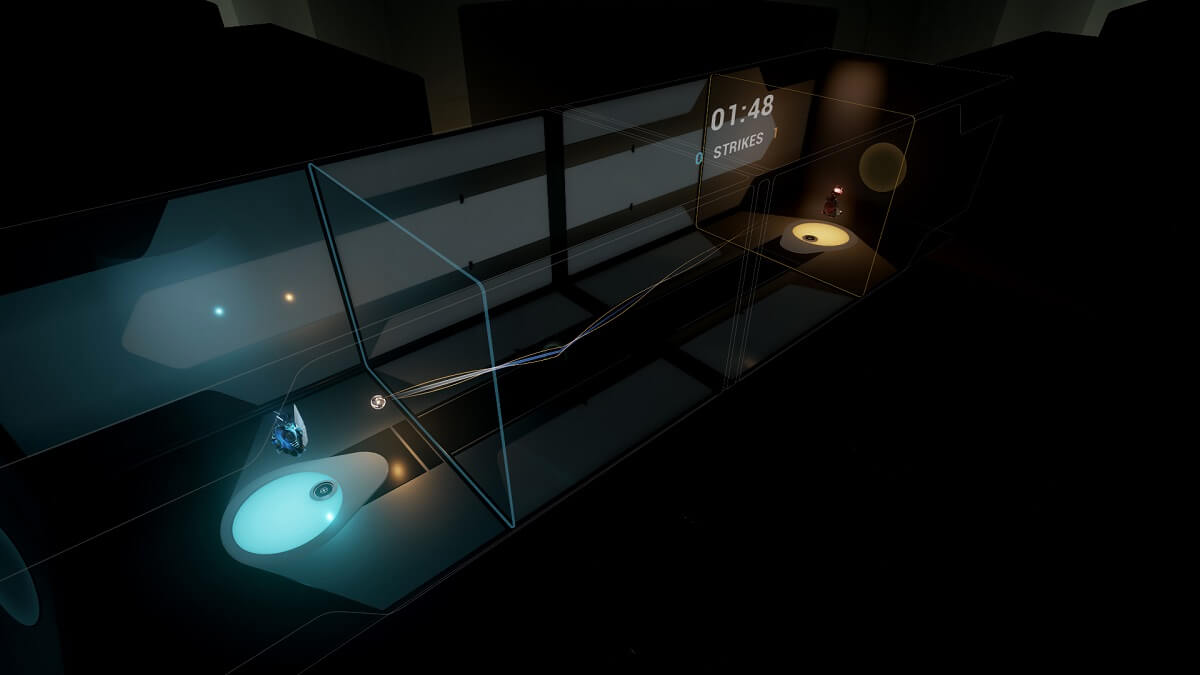