MOUNTAIN VIEW, Calif. — The technology world was out in force to meet and mingle with the entrepreneurs graduating from Y Combinator, dubbed “Silicon Valley’s startup machine.”

And so were the celebs.

In their two-and-a-half minute pitch on stage, most of the startups claimed to be on to the next multibillion dollar market opportunity. The audience heard plenty of bold entrepreneurs claiming to be “the next Google” or the “Internet powerhouse of Latin America.” Most startups fail, but the YC crew is getting very good at one thing in particular: Convincing venture capitalists to open their checkbooks.

VentureBeat set out to pinpoint the top enterprise startups. We spoke with more than 20 investors at the event: cloud computing experts, celebrity investors, and venture capitalists, to find out which startups they earmarked for a follow-up meeting and a potential term sheet.

Just one of them held back on giving his opinion.

I asked actor Ashton Kutcher (the Steve Jobs in Jobs), who showed up to represent his A-Grade Investments fund for his favorite in the current batch. His answer? “Nothing. What can you really know in two minutes?”

Hall of Fame San Francisco 49ers quarterback Joe Montana was the other big star in attendance (and, of course, he was joined by his wife, Jennifer). Montana didn’t earmark any enterprise companies, but told me he was keen on “Uber for flowers” startup BloomThat.

In another surprising twist, about half of the 49 startups that presented are selling to businesses rather than consumers. Many of these companies aren’t operating in the sexiest space, but they are tackling some complex technology problems. Here are the most memorable of the bunch:

Enterprise investors are crazy about Standard Treasury, a startup that aims to be a platform-as-a-service (PaaS) for banks. The company’s goal is to push traditional banks into the modern era. “Thousands of developers have emailed us asking when will this be ready,” said Standard Treasury CEO Zachary Townsend, who formerly worked at payments platform Stripe. 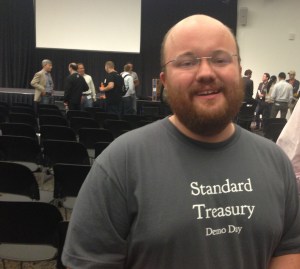 Customers in the financial services world are in desperate need of a service like this. “Banks need a better way to make money,” Townsend told me prior to the presentation. Many of Standard Treasury’s first customers are leveraging the technology to make money through transactions.

What’s unique?  Standard Treasury is laser-focused on banks — it’s not an online payments system for any merchant. The company has created a menu of APIs that banks can give to developers to access to a range of transaction types, including electronic checks (ACH) and rate-quoting.

“Simple treasury could be big. The team has the right experience, and they are unlocking value — a bit like Twilio for banks,” Bipul Sinha from Lightspeed Venture Partners told me.

“This is the No. 1 industry I can’t wait to see disrupted,” Shivon Zilis from Bloomberg Beta told me. ” Their API first strategy is smart, as it’s an organic and noninvasive way to start working with banks.”

This opinion was echoed by Zach Bogue at Data Collective. “Low interest rates and increasing regulation are compelling banks to open up their infrastructure to programmatic platforms in a way never before possible,” he said.

Apptimize hopes to follow on the heels of Optimizely, one of the most promising startups to graduate from Y Combinator. In fact, the elevator pitch is “Optimizely for mobile.” As you might expect, the company helps businesses perform AB tests for applications on Android and iOS.

What’s cool about it? Cofounder and CEO Nancy Hua is an MIT grad and former algorithmic trader who said she left her job, which paid her “millions of dollars per year” to start Apptimize, “the larger opportunity.”

What’s unique? A marketer can alter a mobile app without any programming experience — they won’t need to run changes by the development team. The team said they spoke with the vice president of mobile at Groupon, who would pay $20,000 a month for the service. 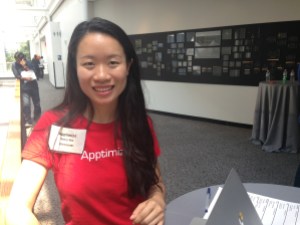 Above: Apptimize founder Nancy Dua started the company in 2012

Ex-rapper and Bay Area personality MC Hammer pointed out that this startup is operating in a “good niche,” and that he was impressed by the team. He isn’t the only investor that plans to reach out. “A/B testing a huge market and true mobile first hasn’t been cracked yet,” Shivon Zilis, an enterprise-focused investor from Bloomberg Beta, told me.

“Mobile is the new battleground for user conversation, and Apptimize can help marketers win users,” added Bipul Sinha from Lightspeed Venture Partners. Investors were also buzzing about the market opportunity.

“Mobile testing and optimization will be an important category as more businesses leverage mobile — most retailers are getting 30 percent of their site traffic on mobile,” said Indy Guha at Bain Capital Ventures.

StatusPage just launched six months ago and is already used by some of the largest cloud companies in Silicon Valley. StatusPage does exactly what you think — it hosts status pages for websites, so websites can communicate with visitors about any potential issues.

What’s cool about it?
The company is growing quickly and already pulling in about $8,500 a month in revenue. The founders already claim to have reached profitability, given that its customers include Citrix, New Relic and Disqus.

What’s unique?
Chief rival PagerDuty informs developers about a potential problem, so they can fix it. Status page tells the public. The company aims to do far more than just hosted status pages in the long term — but this is a good start. “We are building technology to monitor every cloud service provider on the Internet,” said founder Steve Kleinon onstage.

What are investors saying?
Several investors told me off the record that they are keeping tabs on this company — but are not yet ready to cut a check. The competition is strong, but investors were impressed by StatusPage’s quantity of customers.

DataRank, formerly known as TTAGG, organizes online conversations for consumer brands. Marketing teams can monitor certain topics, and DataRank will get to work, pulling in the most relevant information from across the web and compiling it into a visual dashboard.

“In the past, brands would use focus groups — but we know that focus groups have problems. Now brands have a better way of getting that same information,” founder Ryan Frazier said onstage at demo day.

What’s cool about it?
This company has demonstrated some impressive growth and traction. The team is already working with consumer brands like Clorox. Customers typically pay $5,000 a month, so the founders claim to already be at a half a million dollar run rate.

What’s unique?
DataRank is the first Arkansas company to make it to Y Combinator.

DataRank has already amassed seed funding from Gravity Ventures, where the founder worked as a fellow. On AngelList, where the startup has set up a profile, investors have spoken out about the work ethic and professionalism of the team.

“They have their own machine learning algorithm that can parse out semantics. Pagerank was for knowledge. They are doing the same thing for social media,” said Chris Gottschalk from Blumberg Ventures.

This startup may have been the most complicated of the bunch — it offers a new way to think about servers, describing itself as ” Linux for massive server deployments.” The team behind CoreOS are highly experienced, and includes some of the team behind CloudKick, which was acquired by Rackspace in 2010.

The market opportunity is a new one, according to founder Alex Polvi. In the past, only companies like Google would have enough servers to require a service like CoreOS.

The founders say they are not just looking for a speedy exit, as they already accomplished that with CloudKick.

SoftTechVC’s Jeff Clavier has his eye on CoreOS, as he’s worked with Polvi in the past. MC Hammer cited this startup as his one to watch among the enterprise crowd.

However, the company has remained in stealth mode, so most investors haven’t seen the product in action. Ethan Kurzweil from Bessemer Venture Partners called it “almost too good to be true.”